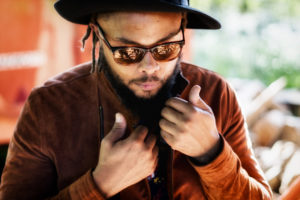 “No one plays the instrument with the same swaggering, swooning grace,” – New York Times

“Richardson expresses black people’s lives past, and present through the sharp lines, and searing tones of his alto sax” – London Financial Times

Born and, raised in Kansas City, Missouri, Logan Richardson was mentored by some of the finest figures in the history of improvised music, including Jay McShann, Claude “Fiddler” Williams, and Queen Bey, in addition to having artists such as Max Roach, Shirley Scott, Jimmy Heath, Clark Terry, Kenny Burrell, Marcus Belgrave, Richard Davis as artists in residence between the ages of 15 to 19 years old.

At 19 years old he moved to Boston, Massachusetts to study at the Berklee College of Music, and after one year Logan left Boston to move to New York to complete his studies at The New School University on a full scholarship. At the age of 21 years old Logan was provided with immediate opportunities to perform, tour, and record professionally with masters such as Joe Chambers, Butch Morris, Stefon Harris, Ambrose Akinmusire, Greg Tardy, Nasheet Waits, Michelle Rosewoman, Billy Hart, and Jason Moran.