**All orders must be placed by 9:00pm, when kitchen closes.

Note:  There is a two minimal purchase of Food and/or Beverage

Veterans 15% discount off the bill with proper identification 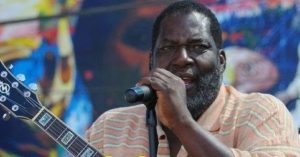 Wali A. Ali is no stranger to the Music Industry he hails from Omaha Nebraska. At the age of 11 played his first professional concert at a place called Allen’s Showcase where the local talent was showcased every Sunday. At the Age of 17 1971 landed a Gig with Motown working with the Funk Brothers Earl Van Dyke Robert White, Pistol Pete, and James Jamerson and the Famous producer Norman Whitfield, producer of Temptations, Gladys Knight, Edwin Starr, And the Undisputed Truth. He is a Studio musician and innovator. While musicians sat in the studio all day Wali, came up with a plan to what was called in the Industry (Over Dub) this proved to be very lucrative and time saving. In 1972 Wali joined the Nation of Islam and from 1972 to 1974 left the Music Industry. In 1977 Wali began touring with Marvin Gaye and is Featured on Marvin Gaye Here My Dear Album. In 1978 along with working with Marvin Wali also toured with Aretha Franklin. In 1980 Wali did a 30 City tour with Patrice Rushen and 1981 Trinidadian tour with Gladys Knight. Wali also Penned a song for Gladys titled Love was Made for Two, featured on Gladys Knight’s Touch Album. Then in 1981 Wali began producing for the Muslim communities project called Committee to Remove All Racial Images attempting to portray Divine. From that movement came a record called Images. Currently Wali has his own group called “The Biggest Little Band In Town!

Watch this interview to know more about Wali