A $10.00 credit will be applied to the students bill (towards music, food & beverages), students must show I.D.

Valet at the entrance of the Marriott

Etienne Charlesis the Assistant Professor of Jazz Trumpet at Michigan State University.  Hailed byNew York Timesas “an auteur” and byJazz Timesas “A daring improviser who delivers with heart wrenching lyricism.”  According to Downbeat Magazine“Charles delivers his ebullient improvisations with the elegance of a world-class ballet dancer.”  Etienne has received critical acclaim for his exciting performances, thrilling compositions and knack for connecting with audiences worldwide.  In June 2012, Etienne was written into the US Congressional Recordfor his musical contributions to Trinidad & Tobago and the World.

Perhaps more than any other musician of his generation or Eastern Caribbean origin, Etienne brings a careful study of myriad rhythms from the French, Spanish, English and Dutch speaking Caribbean to the table. Crucially, as a soloist, he fully understands the New Orleans trumpet tradition (which is readily discernible in his trademark instrumental swagger) and what famed Crescent City Pianist, Jelly Roll Morton so succinctly captured in the now immortal phrase, ‘The Spanish Tinge’.

As a sideman he has performed and or recorded with Monty Alexander, Roberta Flack, Frank Foster, Ralph MacDonald, Johnny Mandel, Wynton Marsalis, Marcus Roberts, Maria Schneider, Count Basie Orchestra, Eric Reed, Lord Blakie, David Rudder and many others.  He holds a Master’s degree from the Juilliard School and a Bachelor’s degree from Florida State University. 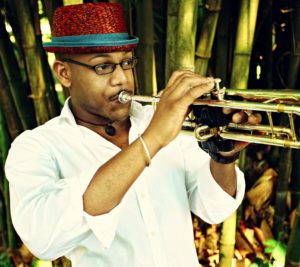 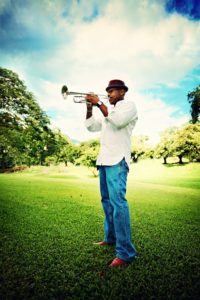 “..Etienne Charles exhibits both an authentic preservation of the music of his native culture of Trinidad as a composer and bandleader, while broadening our scope of understanding through the collaborative sound of American jazz as it meets new colors, new textures, and new motifs across the world. It will certainly bring more of our public into the jazz audience” – Marcus Roberts

“An amazing Trumpet player, and Steel Drum player, and Cuatro player…young Trinidadian who has held onto his heritage” – Monty Alexander

Over its century-plus history, jazz has forged its shape-shifting identity by encompassing a rainbow of musical dialects in an improvisation-infused setting. While jazz’s potency launched into popular appeal based on the integration of the European classical music sensibility and the grassroots of African-American cultural heritage, it has not remained a static idiom. Indeed, jazz has become organically enlarged, expanded and revitalized by cultivating new influences into the tradition, from the Afro-Cuban movement of the ’40s to today’s artists embracing their ethnic heritage.

One of the most compelling and exciting young jazz artists ushering the genre into groundbreaking new territory is trumpeter/bandleader Etienne Charles, who, still in his 20s, has already recorded three impressive and well-received albums for his own Culture Shock Music imprint. His new album, Creole Soul, is a captivating journey of new jazz expression. It buoyantly taps into a myriad of styles rooted in his Afro-Caribbean background and plumbs the musical depths of the islands, from calypso to Haitian voodoo music. Also in the jazz amalgam mix are rock steady, reggae, belair, kongo and rock as well as the influence of Motown and R&B music Charles listened to on his parents’ record player when he was growing up.

“Jazz is Creole music,” says Charles who was born in Trinidad, relocated first to Florida and then New York to further his jazz studies (graduating, respectively, from Florida State’s and Juilliard’s jazz programs) and today teaches jazz trumpet at Michigan State University. “As a person in the new world, I’ve been influenced by so much music. And my family has a mixed background, with French Caribbean, Spanish and African roots as well as Venezuelan influences. I come from a fusion of rhythms, a fusion of cultures. That’s what this album is all about: focusing on soul music that is Creole at heart.”