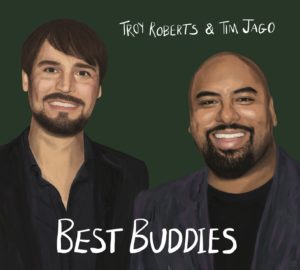 Long time musical collaborators and friends, saxophonist Troy Roberts and guitarist Tim Jago celebrate the release of their latest album, ‘Best Buddies.’ Tonight’s performance will capture the raw energy and excitement of the moment in the straight-ahead, post-bop style, with repertoire comprised of original yet familiar compositions.

Roberts is a flourishing leader with twelve chart-topping albums to his name, two GRAMMY-Nominations, and was a semi-finalist in the 2008 Thelonious Monk International Jazz Saxophone Competition. A long-time New York resident, he is also an in-demand sideman, performing around Europe and the US extensively with artists such as Joey DeFrancesco, Aretha Franklin, James Morrison, Jeff’ Tain’ Watts, Van Morrison, Christian McBride, Sammy Figueroa, Billy Hart, Orrin Evans, and Kurt Elling to name a few. Roberts has imparted his knowledge as a professor on faculty at the FROST School of Music and The New School, whilst maintaining a busy performance and recording schedule around the globe.

Jago also has performed and recorded with a host of world-class musicians, including Terence Blanchard, Dee Dee Bridgewater, Chick Corea, Gloria Estefan, Wycliffe Gordon, Dave Liebman, Bobby McFerrin, Steve Miller, and Arturo Sandoval, to name a few. A semi-finalist in the inaugural Wes Montgomery International Jazz Guitar Competition, he has three leader releases with his trio to his name The Grid (2010), Wear More Headbands (2013), and The Grid III (featuring four) (2015), and is also a member of Troy Roberts’ Nu-Jive group – appearing on Nu-Jive 5 (2013), and Nu-Jive Perspective (2018). Having served on faculty as a professor at The FROST School of Music and The West Australian Academy of Performing Arts, Jago also balances a busy sideman performance schedule.

Accompanying this dynamic duo will be Omaha’s favorite rhythm section; Mitch Towne (organ), and Marty Morrison (drums). Get your signed copy of their new album at this official album release show! 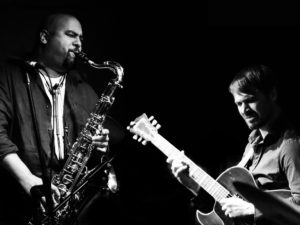