PRESENTED BY THE BLUES SOCIETY OF OMAHA 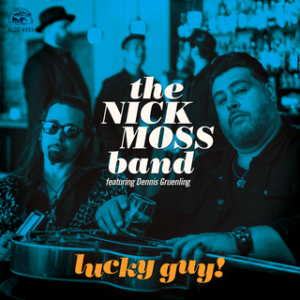 Blues guitar virtuoso Nick Moss and harmonica wizard Dennis Gruenling have been on a winning streak since they first joined forces in 2016. With relentless nonstop touring and the release of their Alligator Records debut, The High Cost Of Low Living, in 2018, The Nick Moss Band Featuring Dennis Gruenling has been playing for wildly enthusiastic fans and winning over critics and radio programmers worldwide. Debuting at #3 on the BillboardBlues Chart, the album topped many 2018 “Best Of” lists. UK tastemaker magazine Mojosaid, “Guitarist and singer Nick Moss shows the world his fearsome guitar chops and his complete familiarity with the great tradition of Chicago blues music. Partnered with harmonica-player Dennis Gruenling, Moss creates a two-headed monster that takes the band thundering through crisp originals.”

Their self-made lucky streak continued into early 2019, when down-and-dirty guitarist Moss—a 30-year veteran of Chicago’s take-no-prisoners rough and tumble West and South Side blues clubs—won the Blues Music Award (BMA) for Traditional Blues Male Artist Of The Year. Gruenling, one on the hottest players on the scene today, took the BMA for Best Instrumentalist–Harmonica. And now, with the odds heavily in their favor, they unleash their dynamic new album, Lucky Guy!.

Lucky Guy!—produced by Kid Andersen (guitarist for Rick Estrin & The Nightcats) and Moss and recorded at Andersen’s Greaseland Studio in San Jose, California—is a foot-stomping showcase featuring the classic Chicago blues sound the band is known for. But, as Moss himself notes, there are also “a few other flavors,” including Louisiana swamp pop, West Coast blues, New Orleans funk, and even some proto-rock and roll. All but one of the 14 songs are originals, with 11 by Moss and two by Gruenling. The band delivers each one with uncompromising skill and authority. Start to finish, Lucky Guy!is a joyous, sonic blast of pure blues power.

Guitar hero Nick Moss paid his dues gigging in the city’s blues clubs under the tutelage of some of the city’s greatest blues luminaries. His fiery fretwork, gruff, soul-charged vocals and memorable original songs place him in a league of his own. New Jersey’s Dennis Gruenling is considered among today’s best blues harmonica players. His high-energy, full-throttle playing has earned him comparisons to the late James Cotton. Living Bluessays, “Nick Moss’s muscular, electric energy combines jaw-dropping guitar, gruff, soulful vocals and impassioned songwriting. Gruenling is a contemporary harmonica master…impressive, genuine and fresh-sounding.”

Although Moss and Gruenling had known each other for 20 years and had jammed together often, it wasn’t until 2016 that they decided to team up full time. Moss’ expressive and expansive blues guitar playing flawlessly meshes with Gruenling’s monster harmonica chops. On stage, the two communicate seemingly telepathically, as Moss lays down the deepest blues licks and Gruenling’s harmonica wails and howls in perfect response, with Moss’ top-notch band completing the ensemble with their energy and expertise.

Growing up in Chicago and standing tall at 6’2”, Moss dreamed of playing both music and sports. His mother was a huge blues fan, even taking a young Nick to see Muddy Waters live in concert. Kidney surgery sidelined his athletic hopes. To lift his spirits, Nick’s brother snuck the 18-year-old Nick out of the hospital soon after his surgery and took him across the street to see Alligator artists Little Charlie & The Nightcats perform. It was there and then that Nick dove headfirst into the blues, deciding that a career as a bluesman was for him.

Originally a bass player, Moss got his first professional break touring and playing with legendary West Side Chicago guitarist Jimmy “Fast Fingers” Dawkins. He next toured with Willie “Big Eyes” Smith (longtime Muddy Waters’ drummer), leader of the Legendary Blues Band. Finding himself in need of a guitarist, Smith insisted Moss switch instruments. Combining his natural talent with non-stop woodshedding and playing every jam session, Moss quickly became one of the city’s most sought-after players. Bluesman Jimmy Rogers (famous for his pioneering guitar work with Muddy Waters and for his solo hit “Walking By Myself”) hired Moss to join his touring band and became his mentor. Moss’ other influences include B.B. King, Freddie King, Earl Hooker, Magic Slim and other groundbreaking players.

Moss formed his own band in 1997 and released the first of his 13 albums a year later on his own independent Blue Bella label. Since then he’s earned legions of fans around the world, playing over 100 shows a year. Moss has shared stages with Buddy Guy, Kenny Wayne Shepherd, Gary Clark, Jr., David Hidalgo and many others, and is an in-demand guest, always welcome to sit in with his musician friends around the world.

As a teen, Gruenling heard the Alligator recording Harp Attack!(a summit meeting of James Cotton, Junior Wells, Carey Bell and Billy Branch) and decided that blues harmonica was his life’s calling. In addition to Cotton, Gruenling was inspired by blues harp masters Little Walter and George “Harmonica” Smith as well as by saxophonists, including Lester Young and Red Prysock. A self-taught player and a natural entertainer with nine albums to his credit, Gruenling’s giant, fat-toned harp work, raw-boned singing and untamed energy are a perfect foil for Moss’ hair-raising guitar playing and straight-from-the-shoulder blues vocals.

With Lucky Guy!and upcoming North American and European tours in the works, The Nick Moss Band Featuring Dennis Gruenling will prove it’s not luck but talent that earns them standing ovations night after night as they barnstorm clubs, concert halls, roadhouses and festival stages. “When the band and I get on stage,” says Moss, “the music takes over. We can’t hold back and the energy just comes pouring out. We get carried away and the audience gets carried away with us.” And once that happens, everyone is in luck.

Anson Funderburgh mixes up a powerful gumbo of Texas jump blues and Delta blues that can’t be found anywhere else. His band, Anson & The Rockets, won 10 Handy Awards (Blues Music Awards)!! He has played with such greats as Lightnin’ Hopkins and has production credits with John Nemeth, Nick Nixon and Andy T. His guitar work appears on CDs by Delbert McClinton, The Fabulous Thunderbirds, Nick Moss, Barrelhouse Chuck and Eric Lindell. Funderburgh is the only artist to have played every King Biscuit Blues Festival since the first one in 1985.

“None of the younger crop of blues guitarist come close as Anson does to achieving the classic Stratocaster tone defined by Otis Rush in the ’50’s and Magic Sam in the ’60’s. The Rockets have landed and Anson is at the bridge.” (Guitar Player) 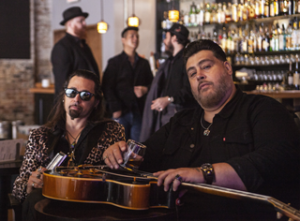