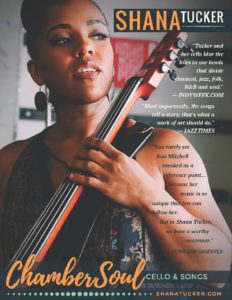 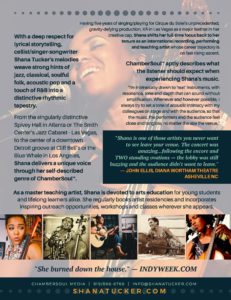 With a deep respect for lyrical storytelling, cellist/singer-songwriter SHANA TUCKER delivers a unique voice through her self-described genre of ChamberSoul™. Shana’s melodies weave strong hints of jazz, classical, soulful folk, acoustic pop and a touch of R&B into a distinctive rhythmic tapestry.

Touted by JazzTimes Magazine as a jazz talent “…whose imprint and vitality has already been quite visible…” Shana’s style and sound as been described as a blend of Dianne Reeves, Joni Mitchell, and Tracy Chapman, with an efficient complexity that is reminiscent of Bill Withers.  ChamberSoul™ best describes what the listener should expect when experiencing Shana’s music. “I’m intrinsically drawn to “real” instruments, with resonance, tone and depth that can sound without amplification. Whenever and however possible, I always try to set a tone of acoustic intimacy with my colleagues on stage, and also with the audience, so that the music, performers and audience feel close and tangible, no matter the size the venue.” 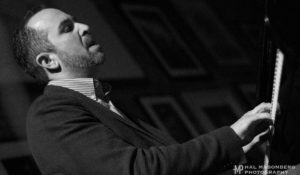 Christian Tamburr is an internationally renowned vibraphonist, pianist, composer and arranger with touring and performances in over 71 countries around the world. Downbeat Magazine recognized him with the “Outstanding Solo Jazz Performance” award and is a 5-Time “Critics Choice Top Rising Star” award recipient on vibraphone. He leads his own critically acclaimed touring ensemble with recent performances at the Kennedy Center, The Newport Jazz Festival, and Lincoln Center where in August of 2019 Christian premiered Sounds For Sculpture “The Awakening” – new multi-sensory project featuring originally composed music inspired by the iconic bronze sculptures of famed sculptor Seward Johnson. As a creative director and producer, Christian has been responsible for the development of multiple headline shows and touring projects around the world, including Between the Lines (Palazzo Hotel, Las Vegas), Modern Warrior LIVE (On Tour), Soundtrack (The Westgate, Las Vegas) and collaborations with Cirque du Soleil, Spiegelworld Productions and Royal Caribbean Cruise Lines. In addition to his public performances, Christian is CEO and facilitator of Sonic Leadership, a musically inspired program on leadership and inclusion with clients such as GOOGLE, Cisco Systems, Amazon and Starwood Hotels. Christian is currently the musical director/pianist for 2018 Double Grammy nominated vocalist Clint Holmes and singer- songwriter Shana Tucker.