18% Gratuity is automatically added to group seating of 8 people or more at one table, for groups larger than four please contact us at info@jewellomaha.com so we can help arrange these seating accordingly. 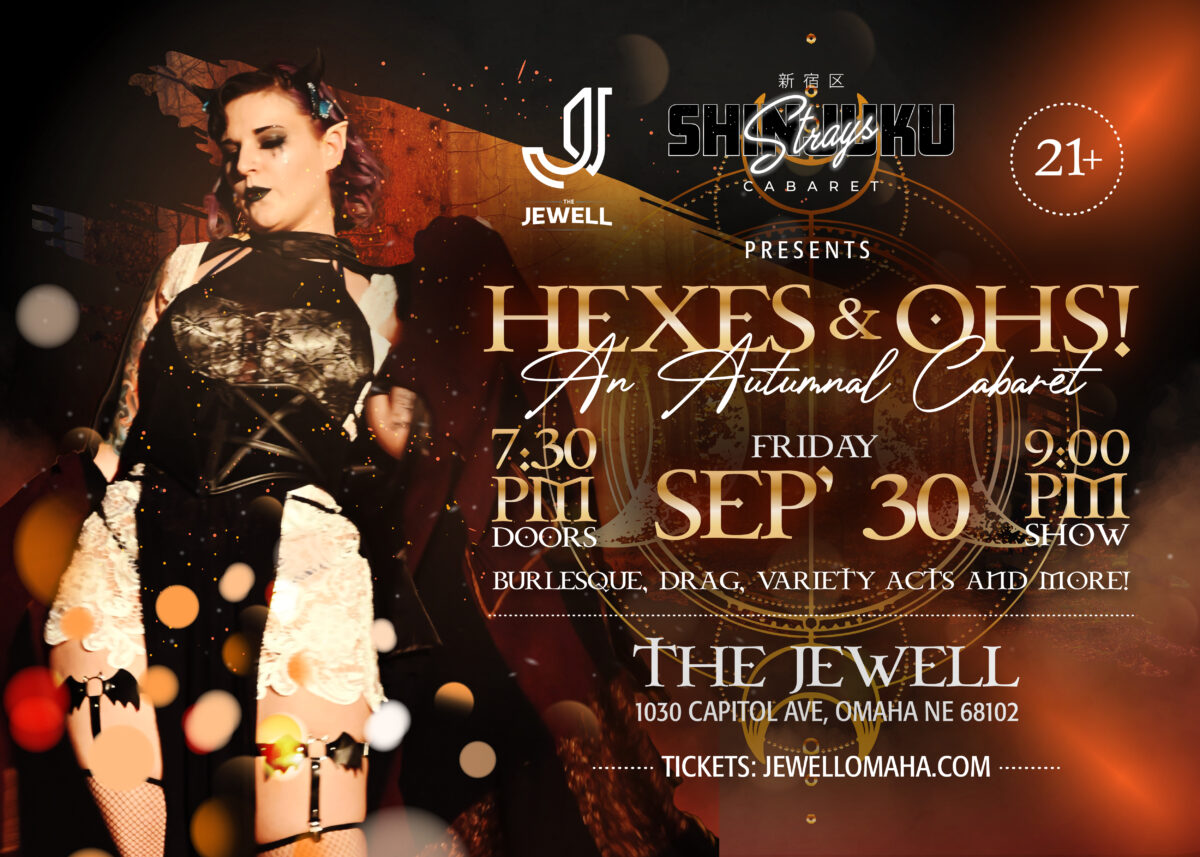 HEXES & OHS!: An Autumnal Cabaret is guaranteed to have you falling in love with the coming season. With a variety of alluring performances like; burlesque, drag, chair and pole dancing & more. Each act will be centered around Mabon, also known as the Autumn Equinox, a celebration of harvest and the changing of seasons.

Come enjoy an evening of sultry and tantalizing performances, bring a couple friends, and grab a specialty themed drink that’s sure to keep you warm as these months grow colder.

Shinjuku Strays Cabaret is Omaha’s premier queer-based performance art troupe. Featuring Burlesque, Drag, Comedy, Music, and more! With well over a decade of experience between them, the Shinjuku Strays Cabaret is founded by Tokio Night, Nova Auron, and Carly Cat. Each bringing their unique talents and perspectives to form this band of misfits. They strive to create safe-spaces that embrace body positivity and variety entertainment.

Tokio Night (he/him) PERFORMER / CO-PRODUCER : “Tokio Night is a queer neo-burlesque performer and veteran, former Mr. OMC 2021, as well as Founder and Co-Producer of The Shinjuku Strays Cabaret. In addition to performing, he is also an illustrator, designer, cosplayer, and LGBTQ+ advocate. Coined the ‘anime pretty boy’ of the Midwest, he’s taken the Omaha performing arts community by storm with his productions, and is thrilled to bring them to life with his troupe at The Jewell.” 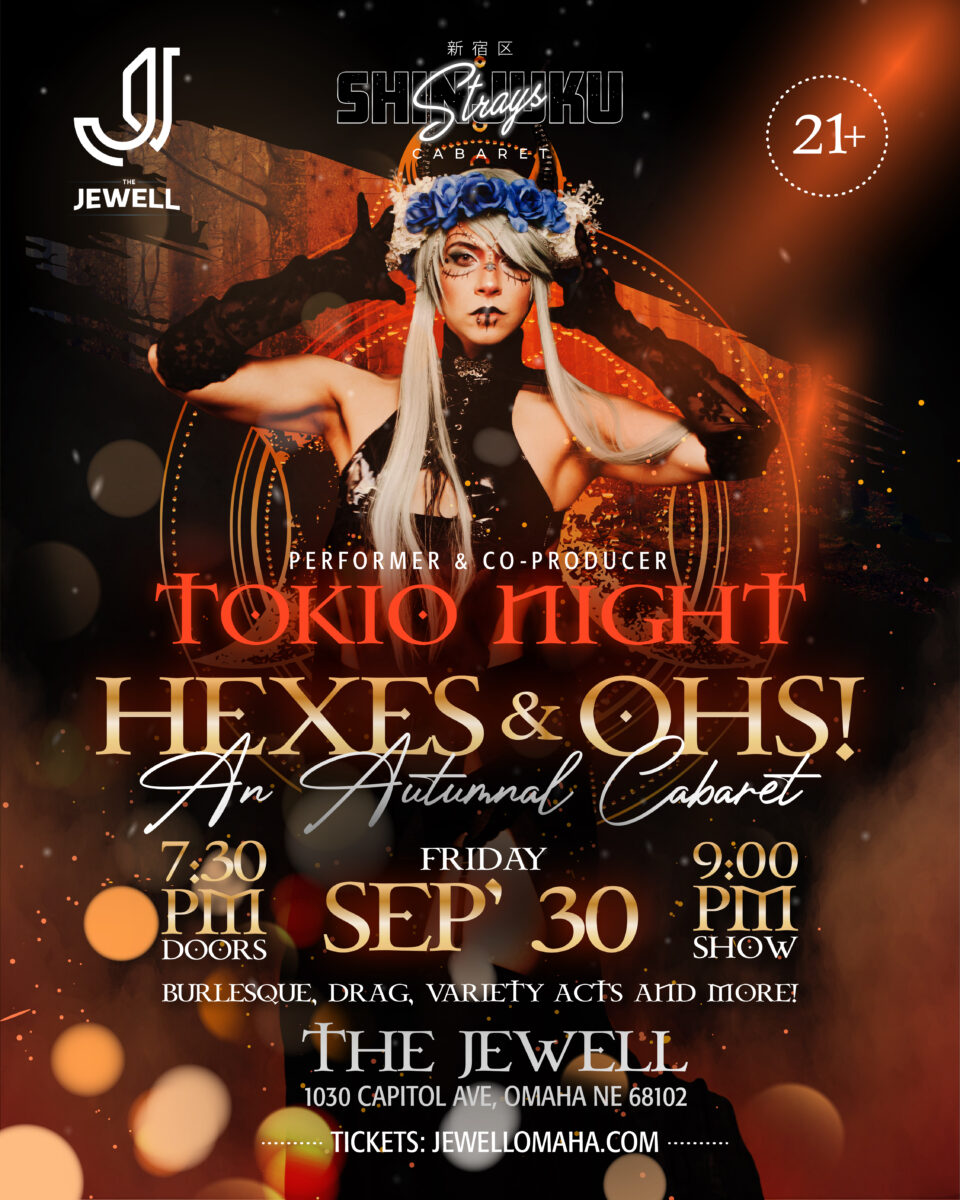 Carly Cat (they/them) PERFORMER / CO-PRODUCER : “Carly Cat is what some would call a “cat of many hats”. Co-Producer of Sultry Sundays at Alice Omaha, Co-Founder of Shinjuku Strays Cabaret, as well as former OMC Royalty. Stocking peel extraordinaire, burlesque baddie, and literal cat person, this enby honey is here to entrance and mystify.” 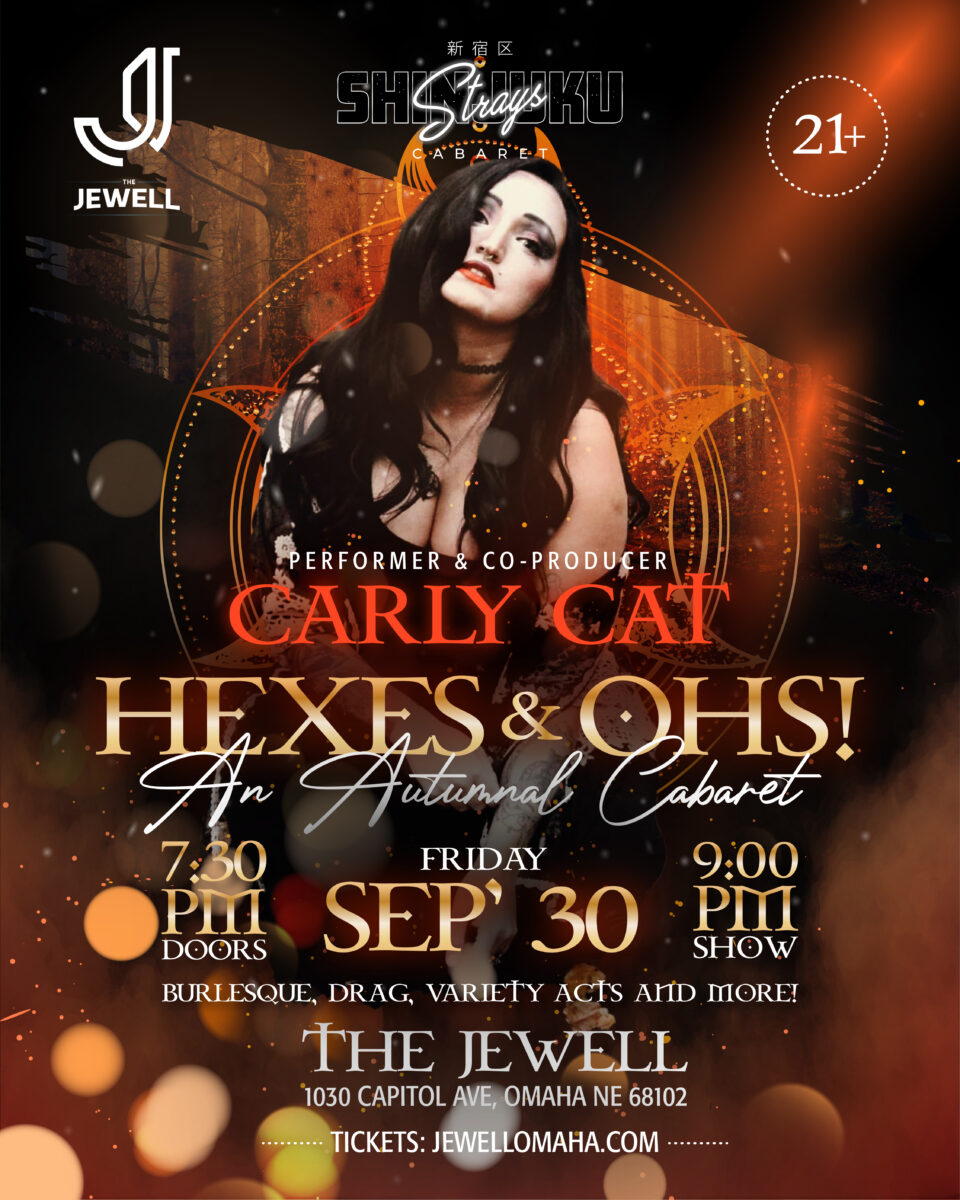 Nova Auron (they/them) PERFORMER / CO-PRODUCER : “Nova Auron is one of the co-founders of Shinjuku Strays Cabaret, and currently reigning OMC Royalty. They have been performing for about 4 years, and are excited to bring their performances to The Jewell!” 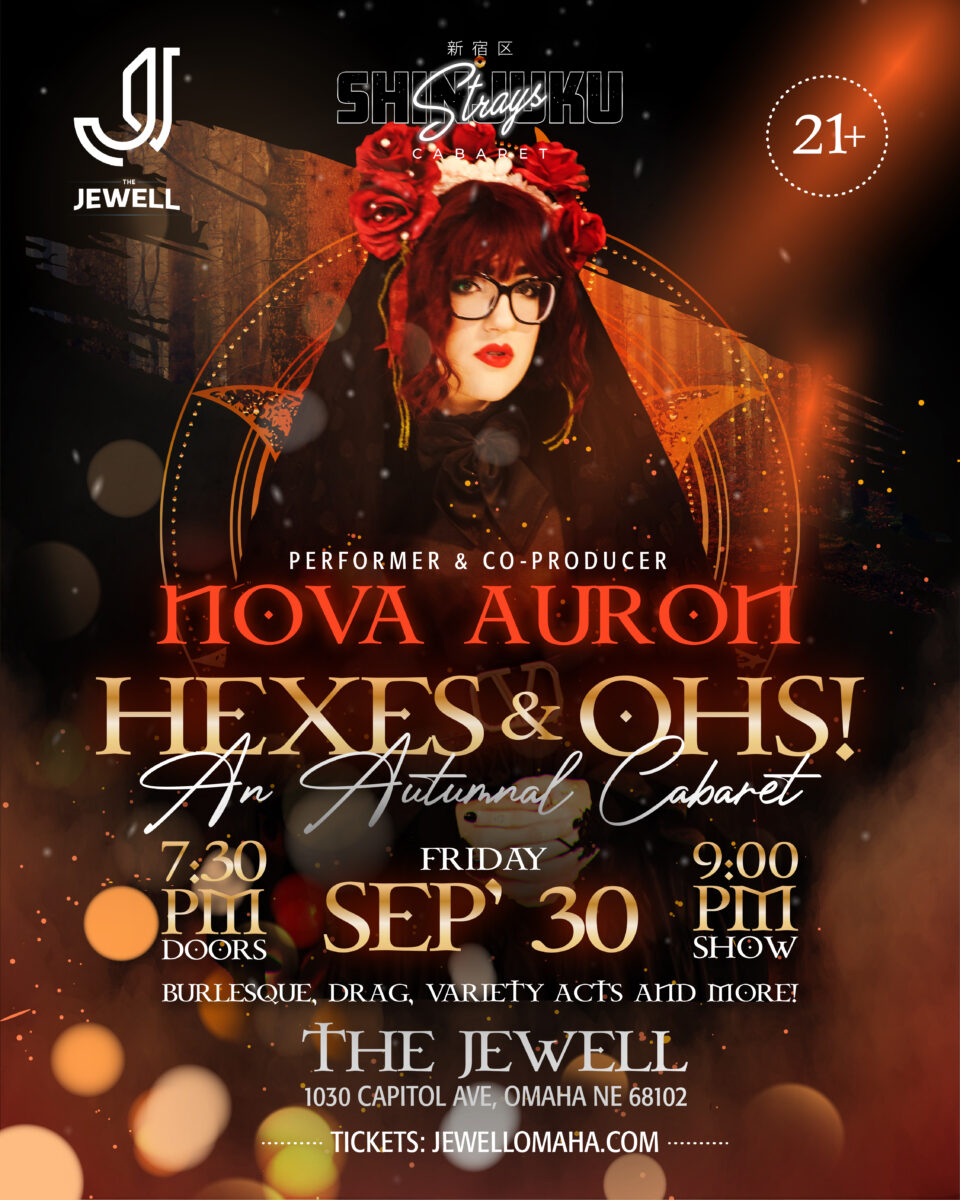 Joaquin Deadman (he/him) STAGE MANAGER / CO-PRODUCER : Joaquin Deadman is one of the co-founders of Shinjuku Strays Cabaret and known to make an appearance in the spotlight from time to time.  He operates Deadman’s Den, his online storefront for his creations, and is also curator of an online LGBTQ+ community.  With a creative background in costuming and design, he helps make sure the show’s concept becomes a reality. 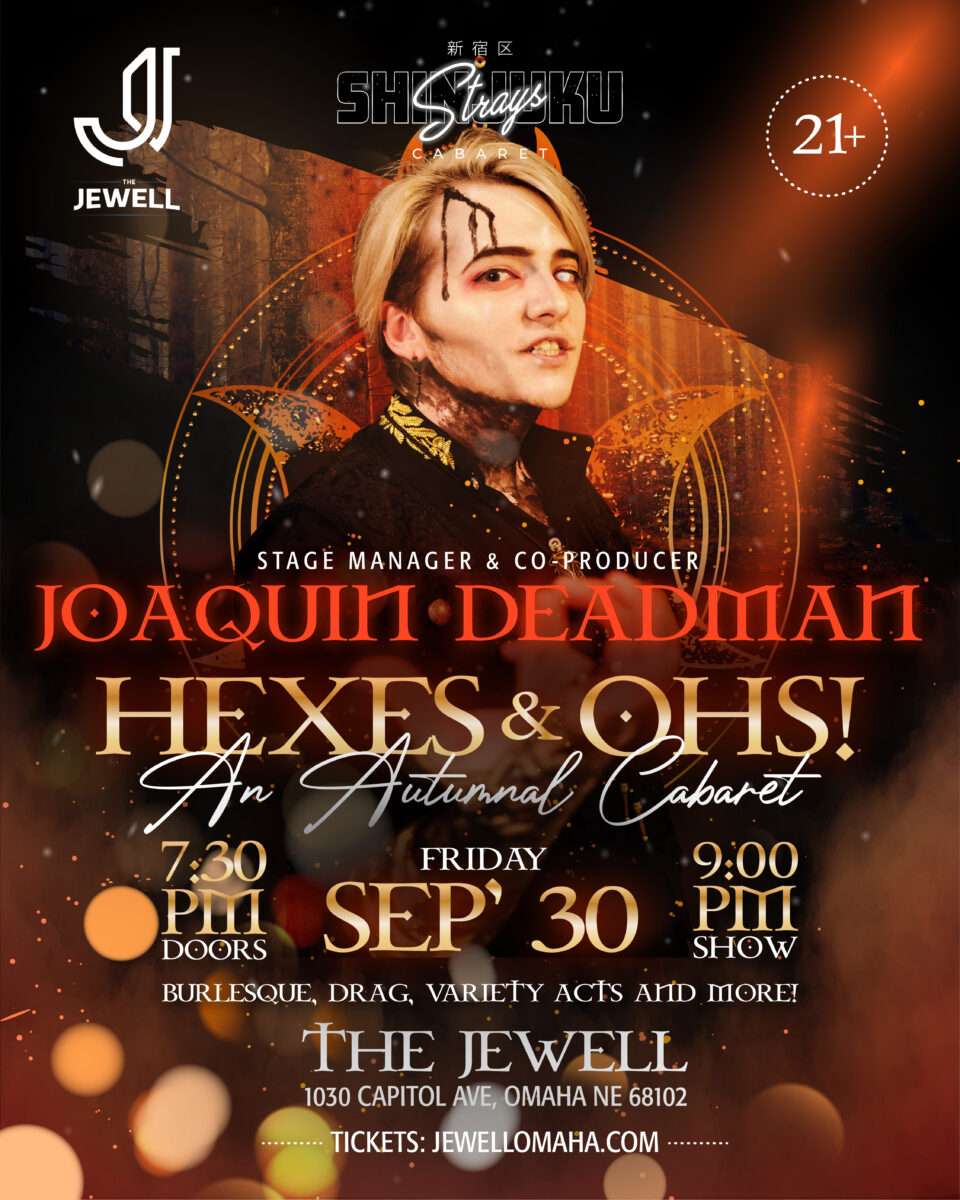 Sammykats (she/her) PERFORMER / CO-PRODUCER : “Sammykats is a performer and co-producer of Shinjuku Strays Cabaret.  She’s recently celebrated her first year anniversary into burlesque, but is no stranger to the stage.  With a background of 14 years in costume construction and masquerade competition under her belt, she’s a force to be reckoned with in the performance scene.” 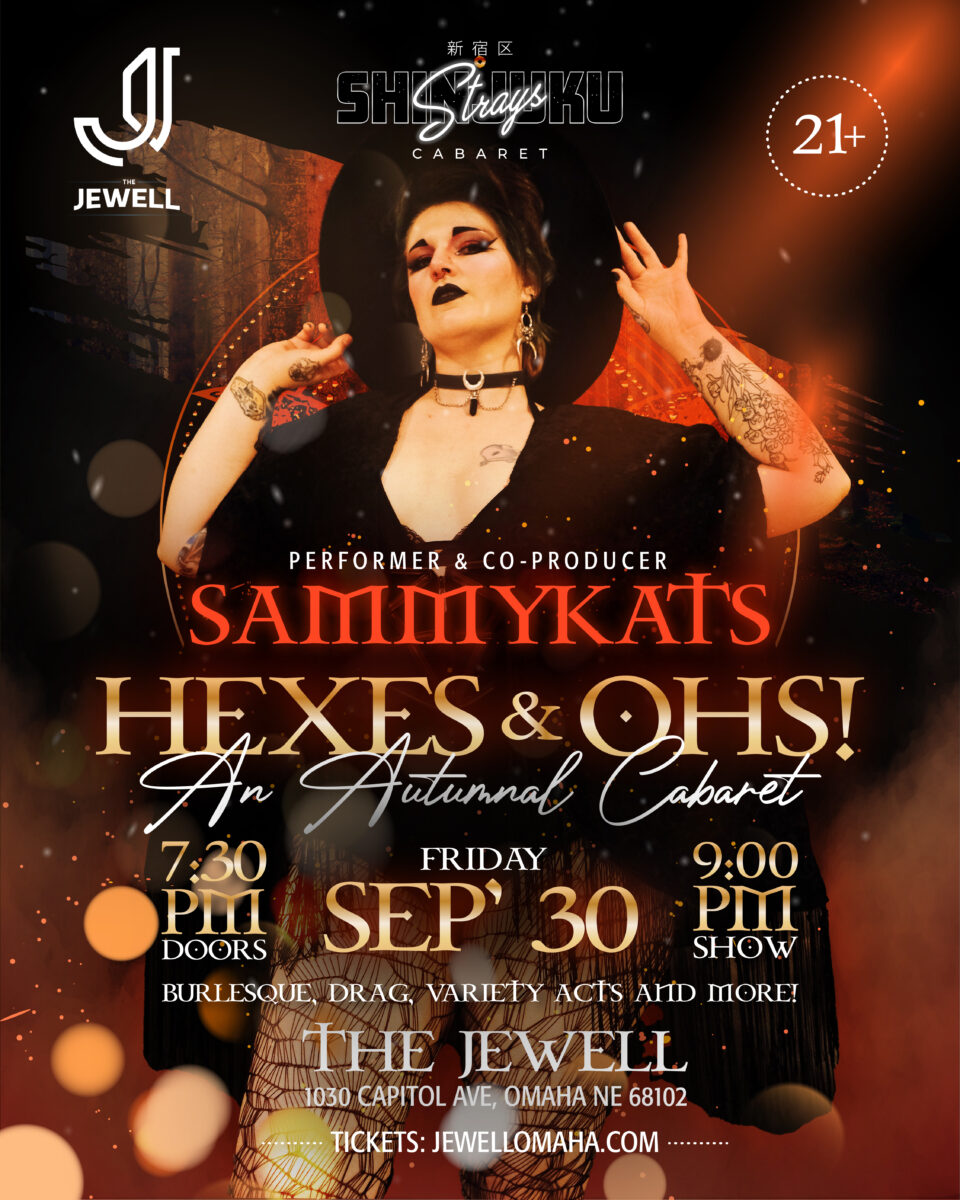 Derrek Sammons (he/him) MERCHANDICER / CO-PRODUCER : “Derrek is one of the co-producers of Shinjuku Strays Cabaret. Coming from over 17 years in music, shows, and performance.  Currently he is also the vocalist for When Towers Fall and Chop Suey! A System of a Down Tribute. He brings a unique perspective and theatrical eye to the Shinjuku Strays to help shape and create an engaging and enthralling show.” 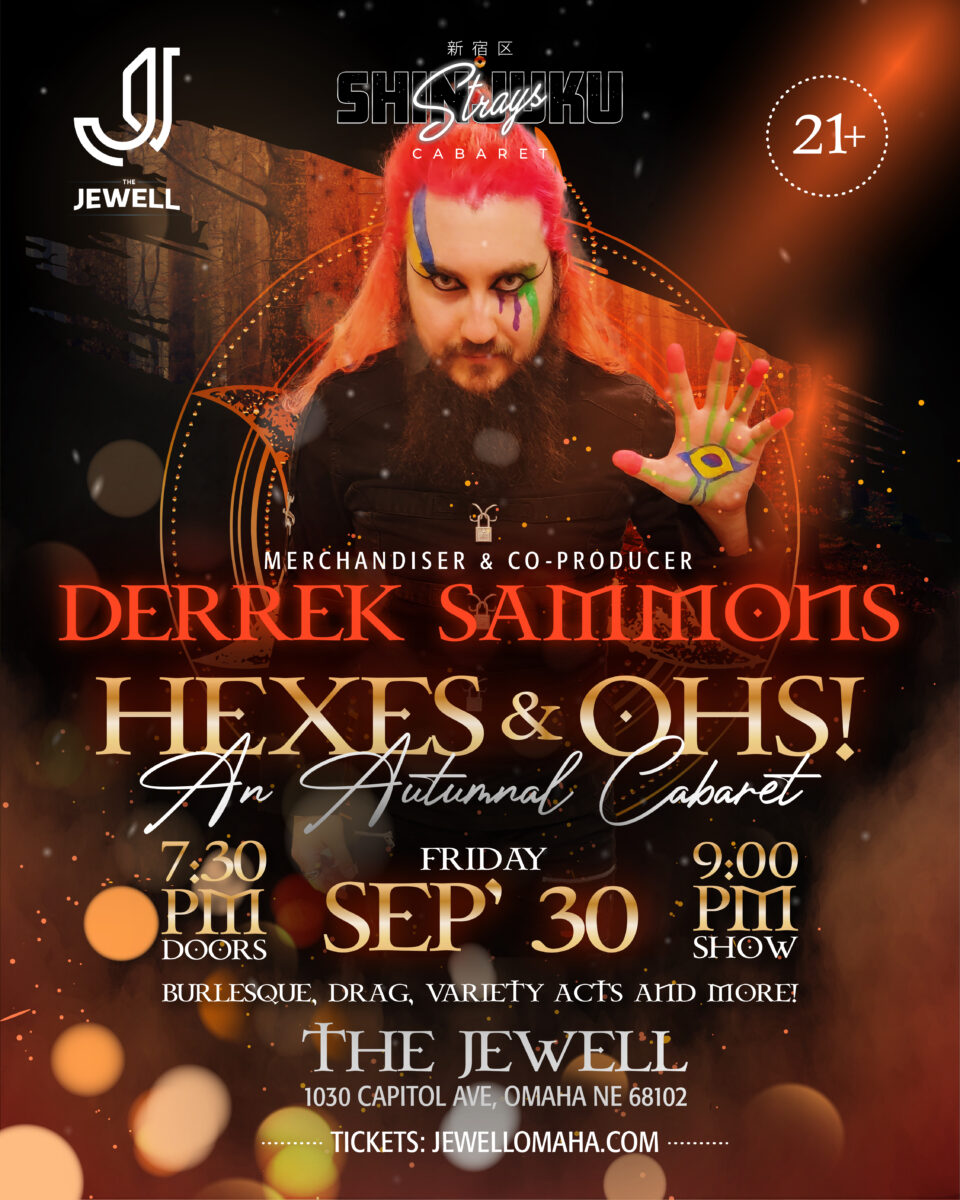 Trixie Phillips (she/her) PERFORMER / CO-PRODUCER : “‘The Naughty Girl Next Door’, Trixie Phillips has been performing, producing and teaching over the last 7 years moving from NYC to AZ to finally, Omaha, NE. She is one of the Co-Producers of Sultry Sundays at Alice and Shinjuku Strays. Her style focuses on both classical and neoclassical movement. 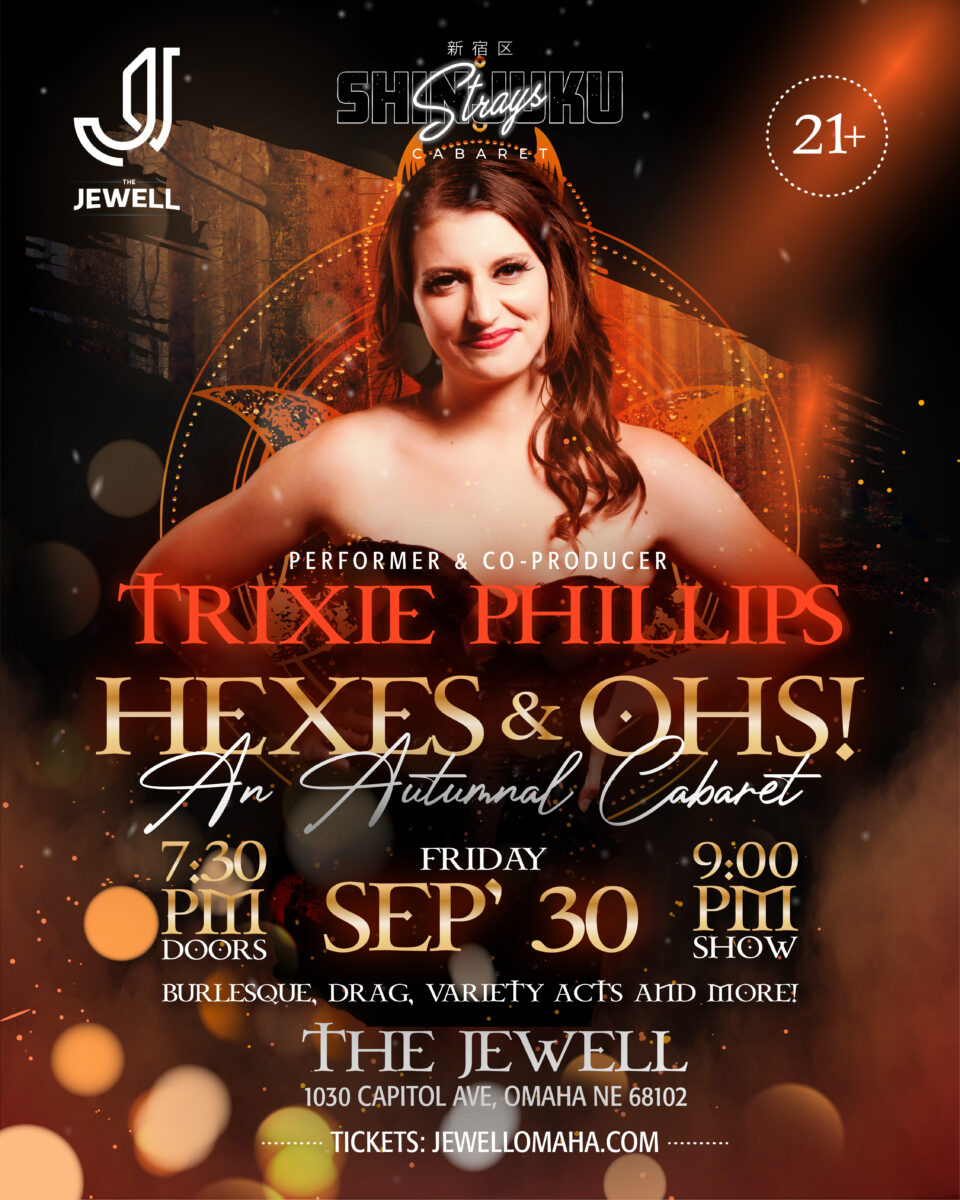 HardKnox (she/they) PERFORMER: “HardKnox has been haunting Omaha for too many years and celebrates their 1 year anniversary of performing on September 18th. They are a child of Nova Auron of Haus Andromeda, and a proud performer of the Shinjuku Strays.” 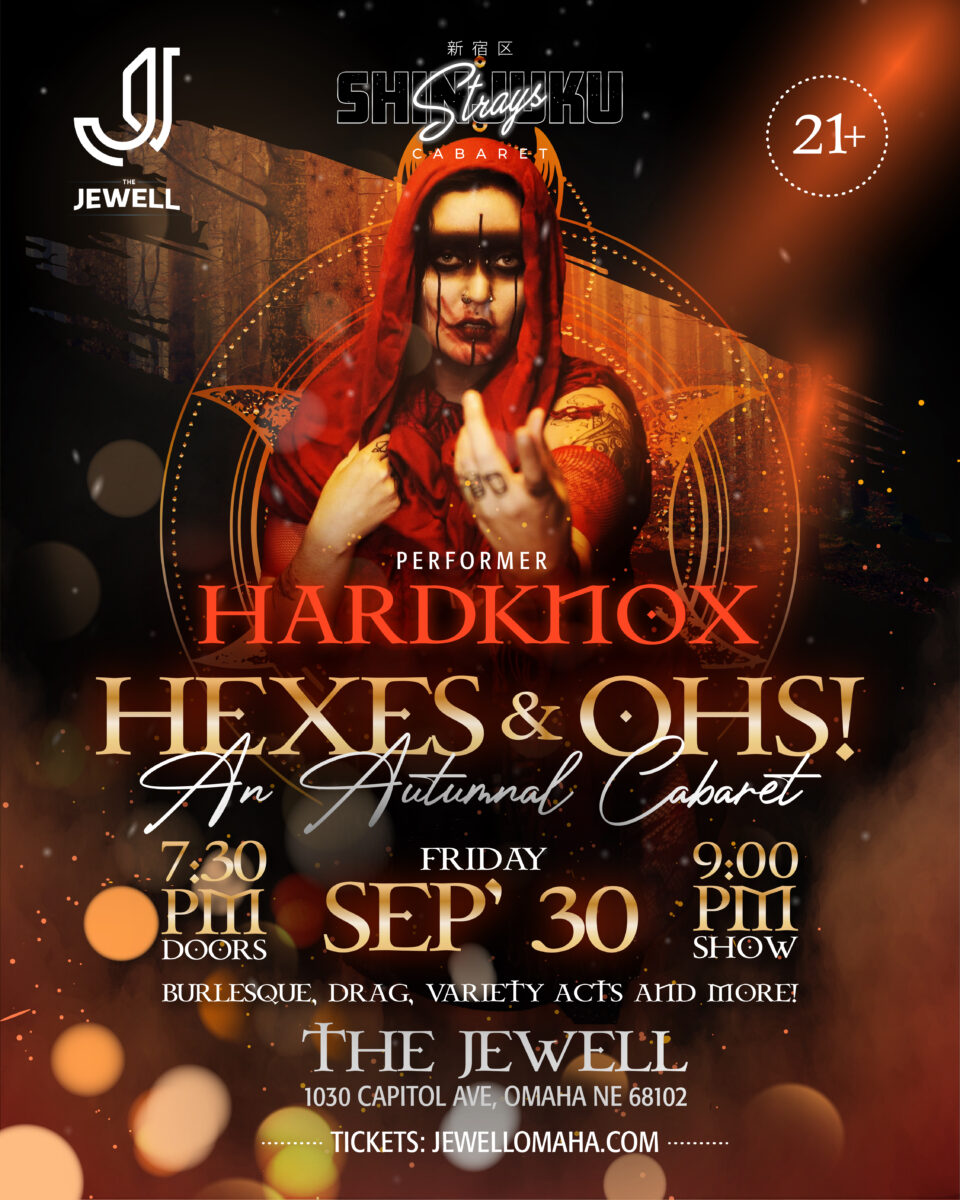 Serenity Lane (she/they) PERFORMER: “Joining for her third show, Serenity Lane works the pole like no other. She started pole dancing just over a year ago, becoming a self taught ‘poleformer’. Driven by rage, ego, and spite, she is sure to give you the show of a lifetime!” 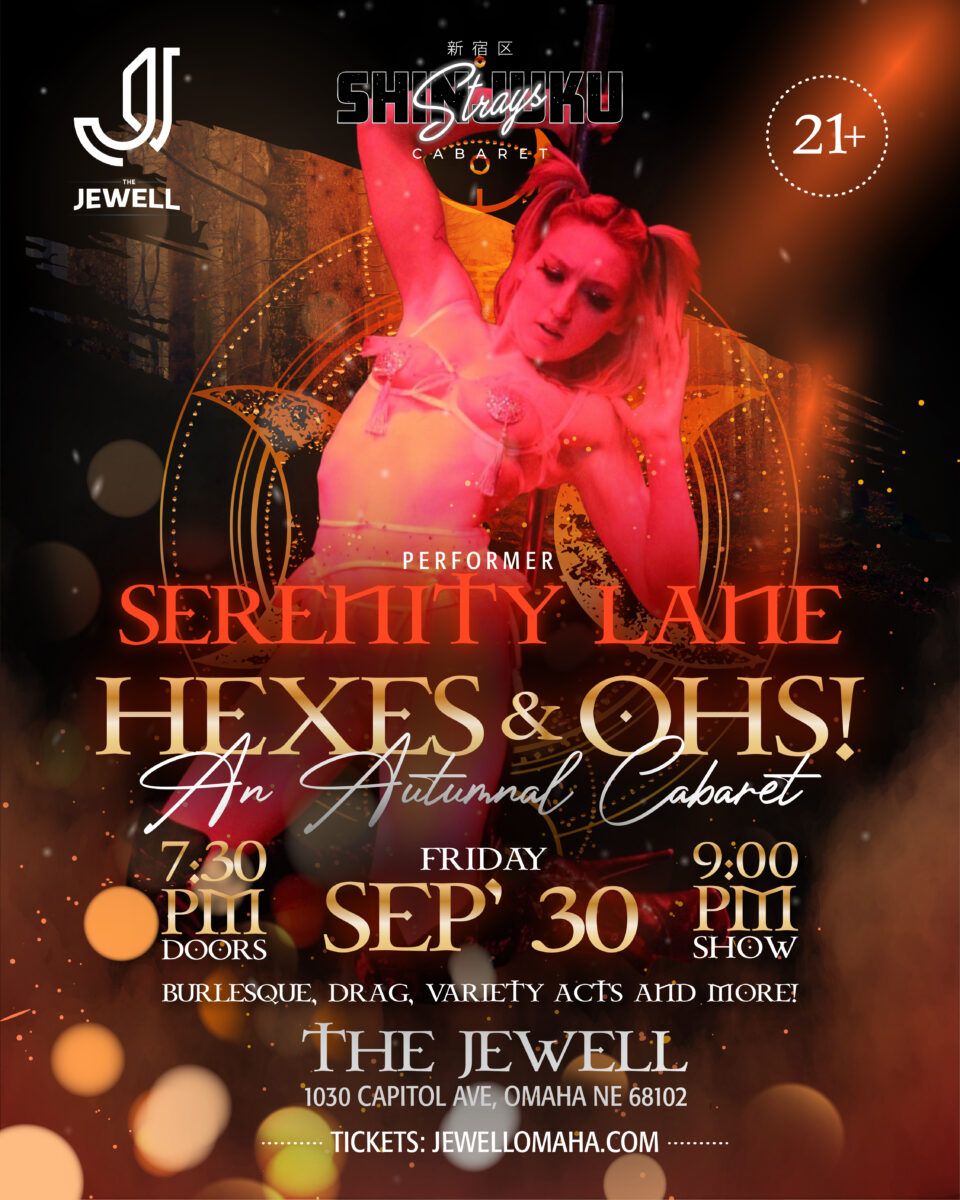 NegaSonic (she/her) PERFORMER: “NegaSonic is a delectable local Burlesque dancer, and singer. She’s performed in venues all across Omaha, and is always ready to serve up a sexy slice of temptation.” 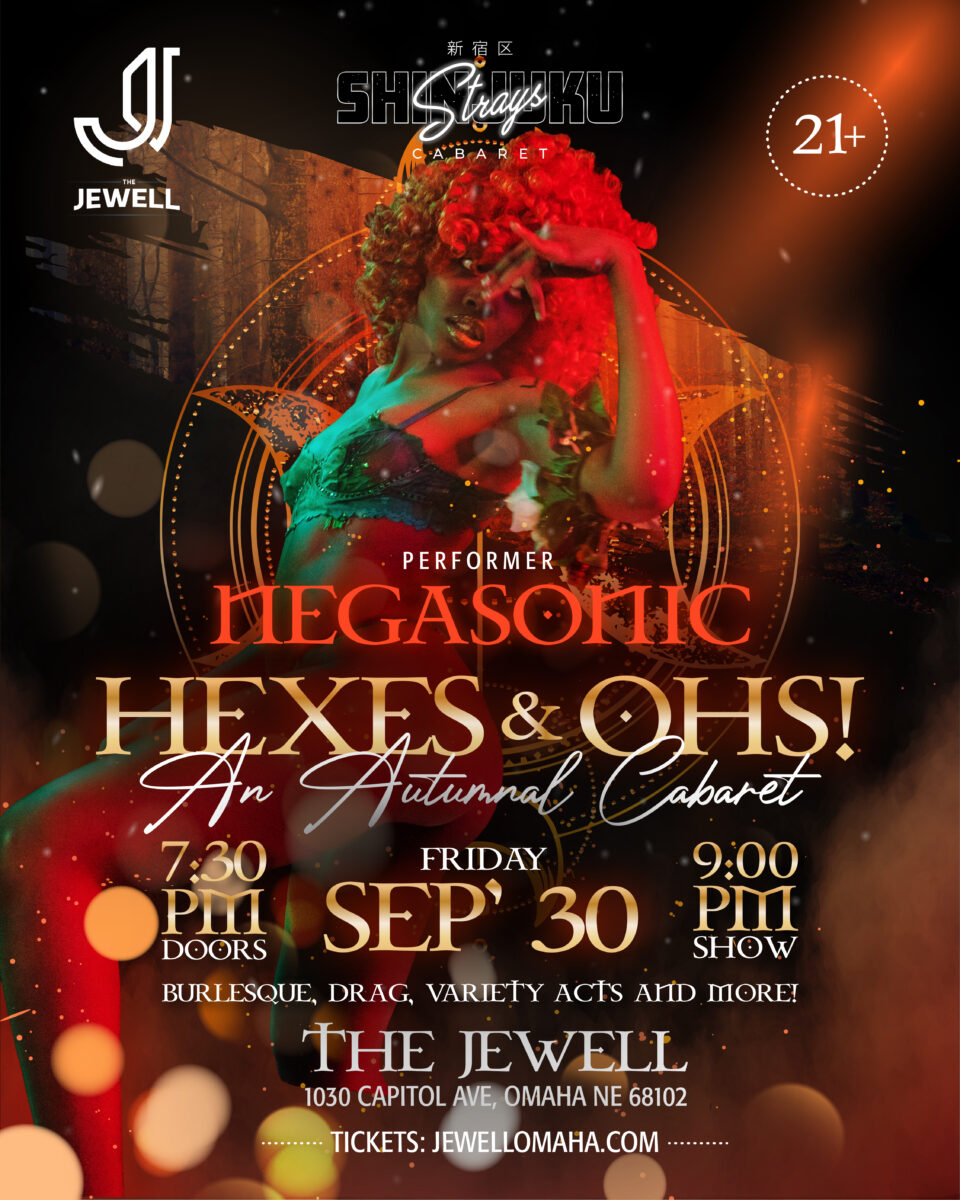 Shae Snow (they/shesquatch) PERFORMER: “Shae Snow is the #Shesquatch of the Metro Area, they are normally seen being too involved in charity operations raising funds for organizations all over the Great Plains and Colorado. They are a former Mr. Midwest Esquire, and a Former Mr. Flixx, they have been fortunate enough to meld their love of performing and their love of kink and fetish education to have been appointed the Show Chair of SEARCH Nebraska – with their Kink Weekend clearing $1400 raised for SEARCH to continue their mission. They are a partner of Nebraska Abortion Resources (NEAR).” 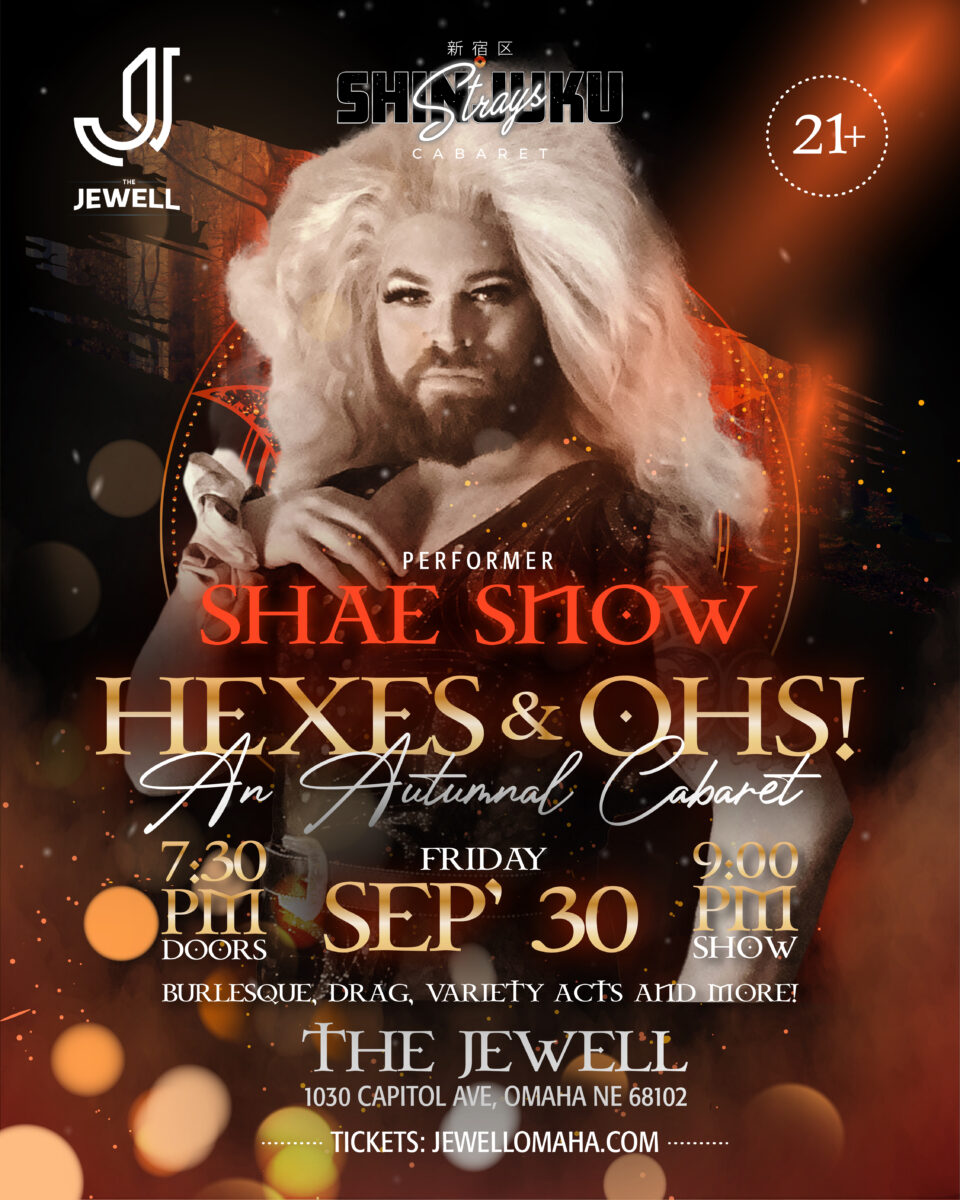 Iona Fortune (she/they) PERFORMER: “Iona Fortune has been performing for the last 5 years. She calls Omaha her home but is known to travel from coast to coast sharing her talents as a sultry burlesque star.” 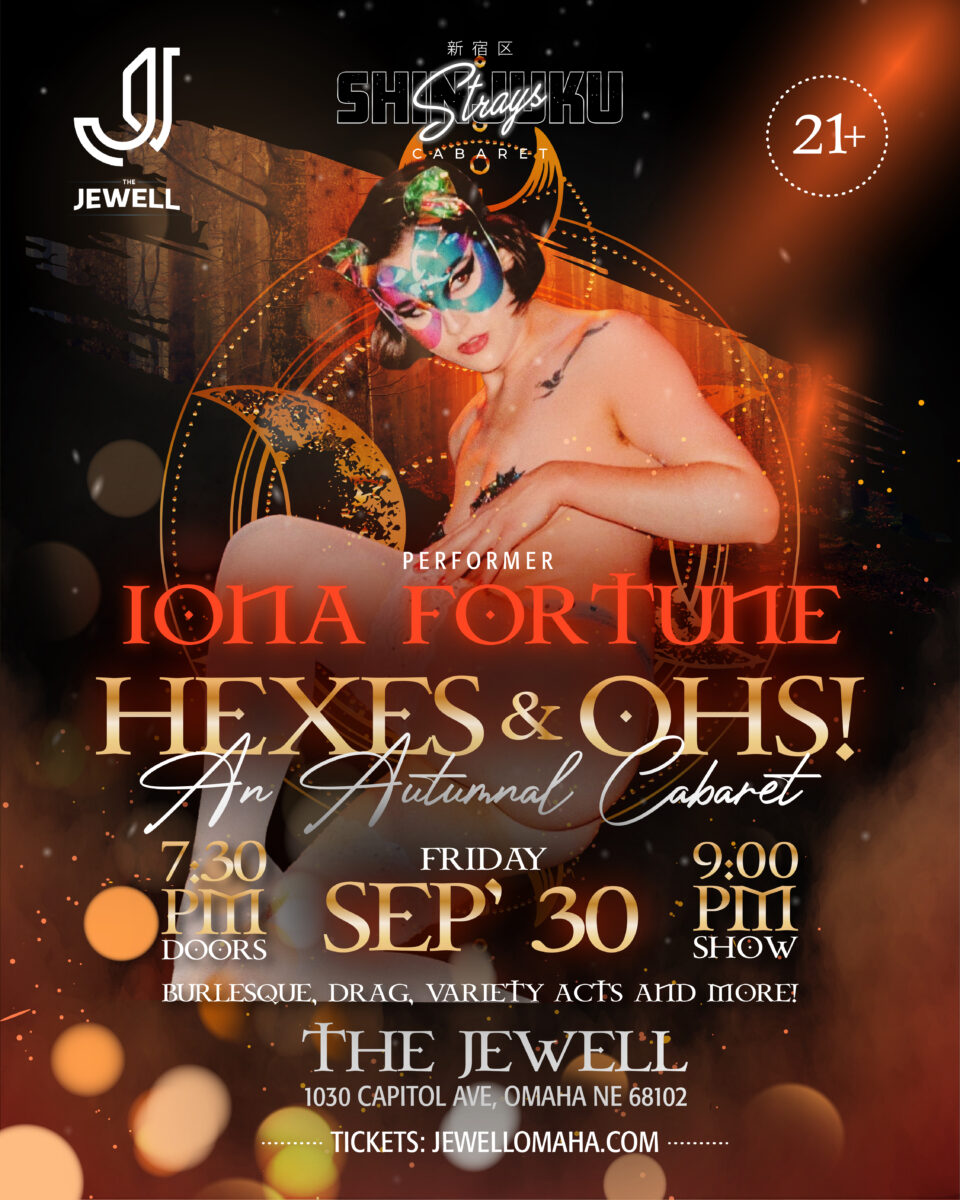 Erin Twench (she/they) PERFORMER: “The stage has been Missus Erin Twench’s playground for 20+ years, but it wasn’t until she grew up that they discovered burlesque. Even then, she didn’t think her wiggles and jiggles would fit in this sultry setting. Lucky for her (and everyone!) burlesque is for all bodies. She’s been delighted, proving herself wrong as the bubble blowing balloon popping curvaceous chanteuse she is.” 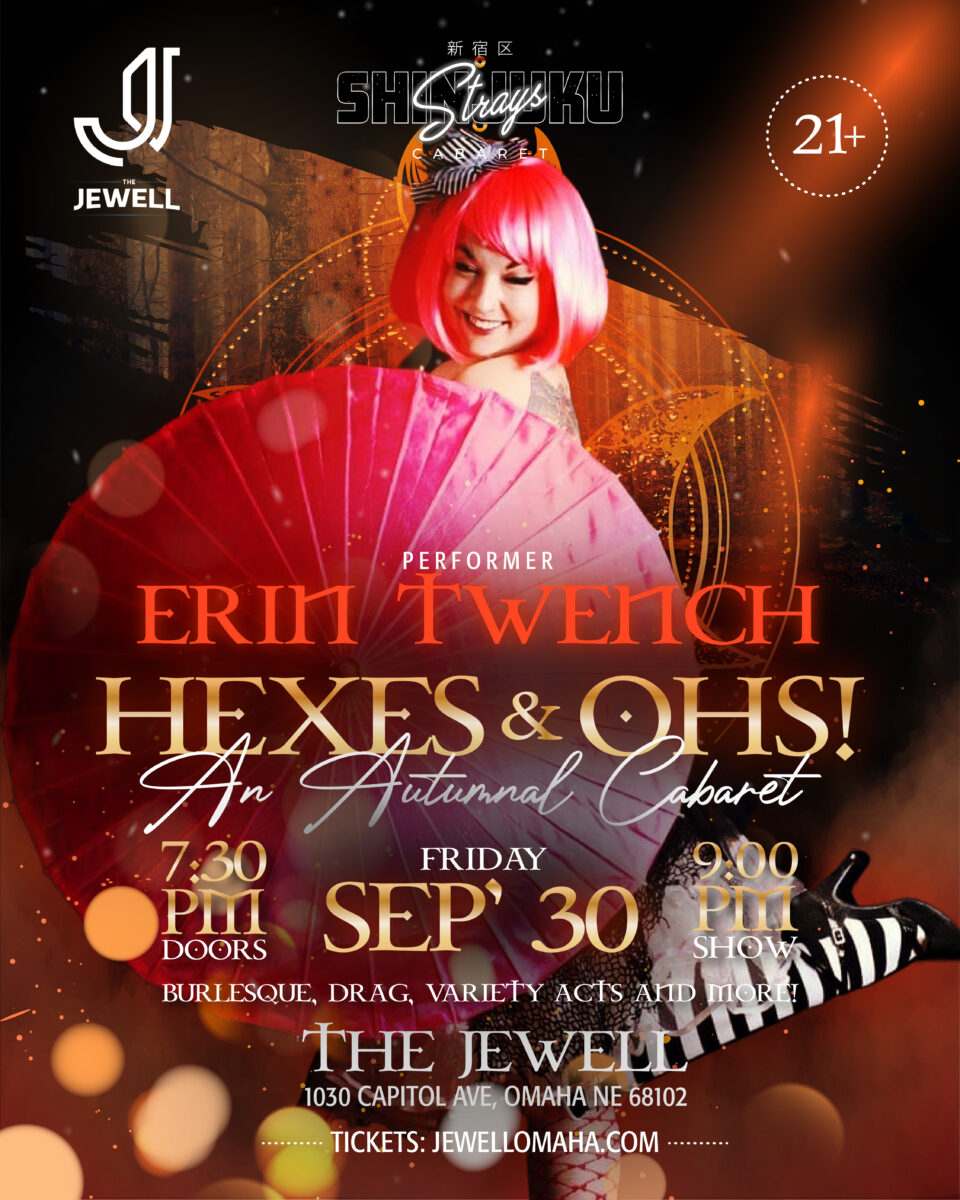 Jupiter Jean (she/her) PERFORMER: “Jupiter Jean has only been in the burlesque scene since march and has performed in places like The Down Under, the Reform Church and Detox Lounge. She’s done dance her whole life and is getting back into her passion for cosplay. She’s always trying to think outside the box and draws inspiration from pop culture from her childhood.” 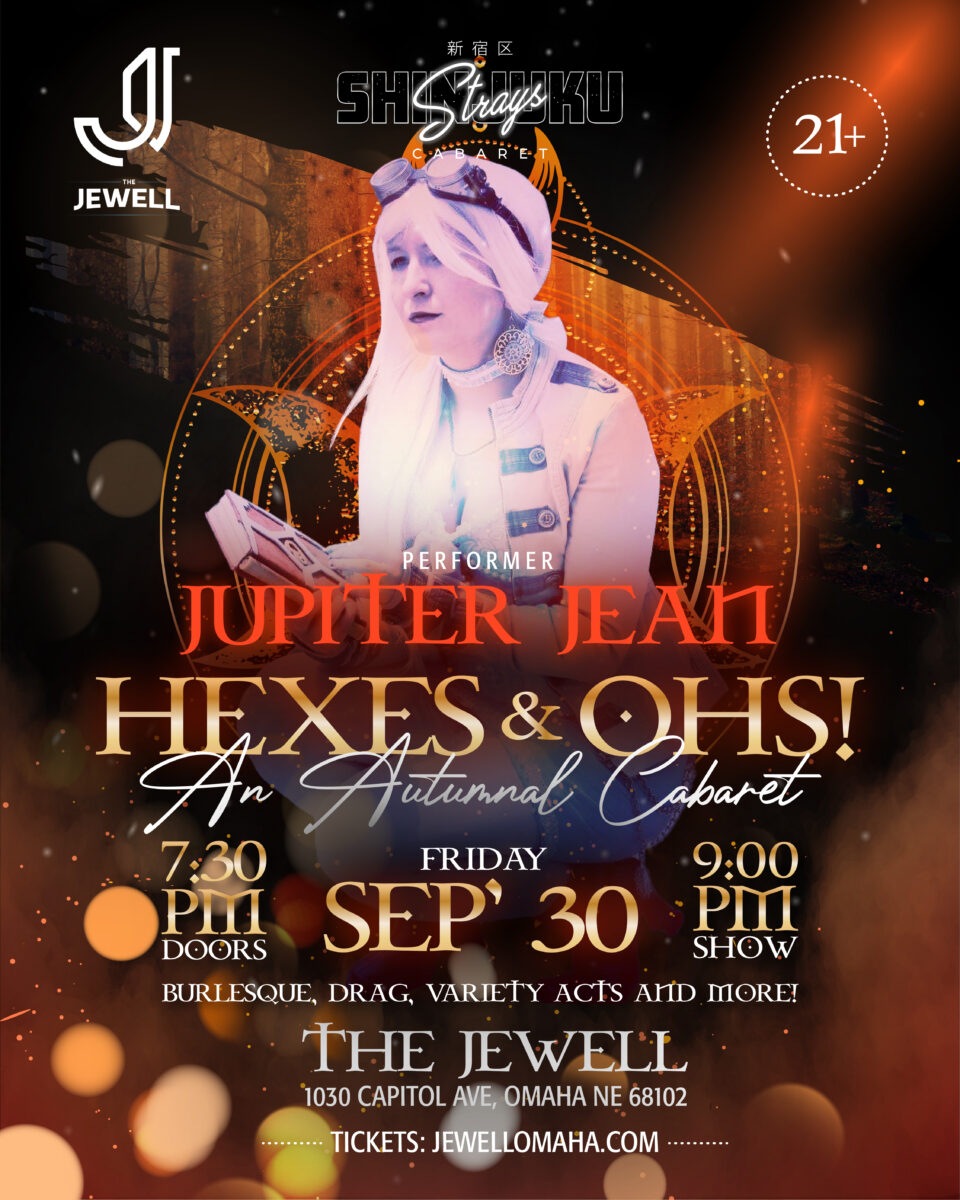 Usagi Tsunami (she/they)PERFORMER: “Baby burlesquer breaking into the local scene! Hoping to promote body positivity and weirdness within the Omaha area. Cosplaying, singing, gaming, cat loving all around dork with a love for the risque!” 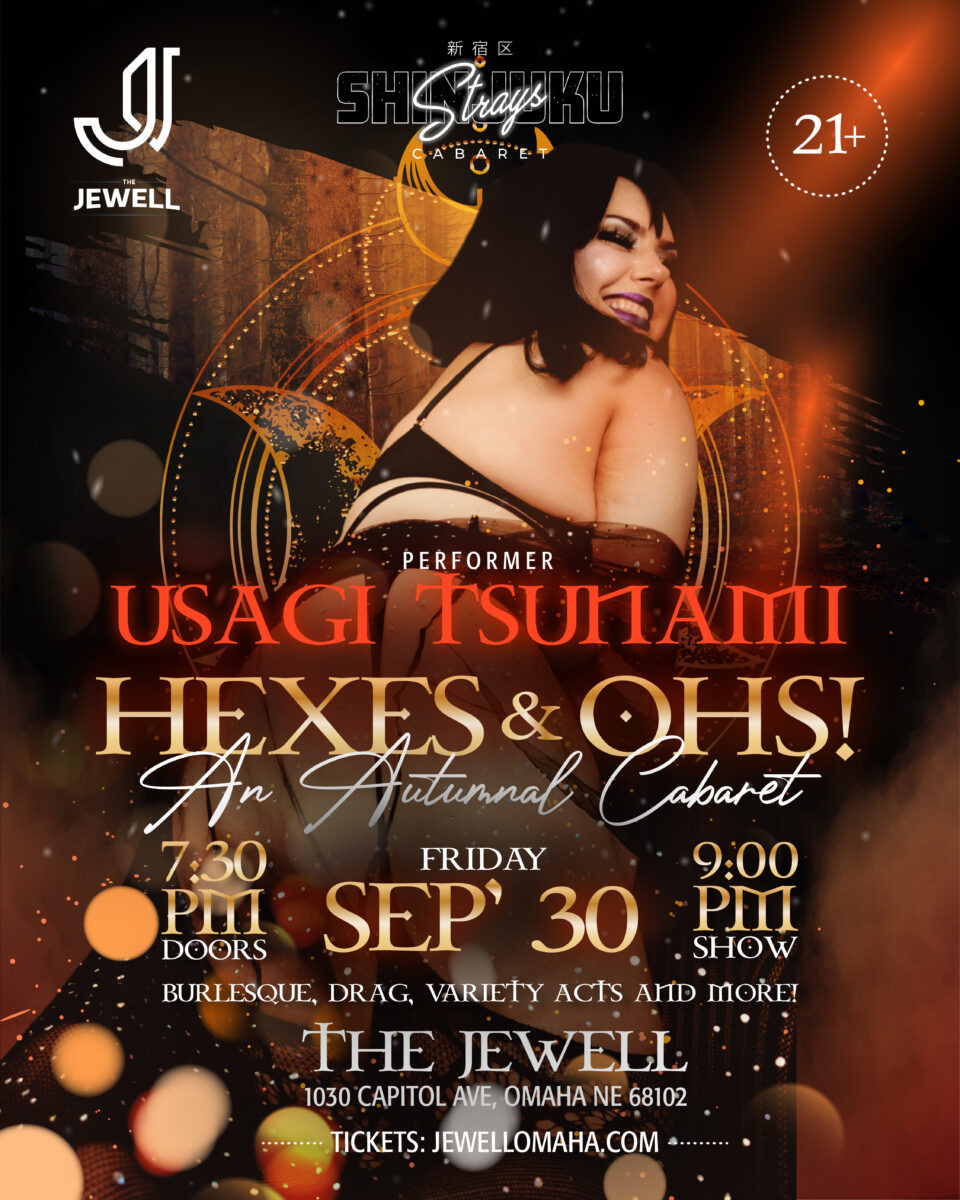 Granville Sharpe (he/him) MASTER OF CEREMONIES: “Logical and sane with just the right mixture of brazen enthusiasm to make it seem the contrary, Granville Sharpe returns to the Jewell to emcee for you all this most enchanting evening. A career bartender, novice magician, and long time story teller, he can’t wait to entertain you all betwixt performances and introduce to you all of our fine performers.” 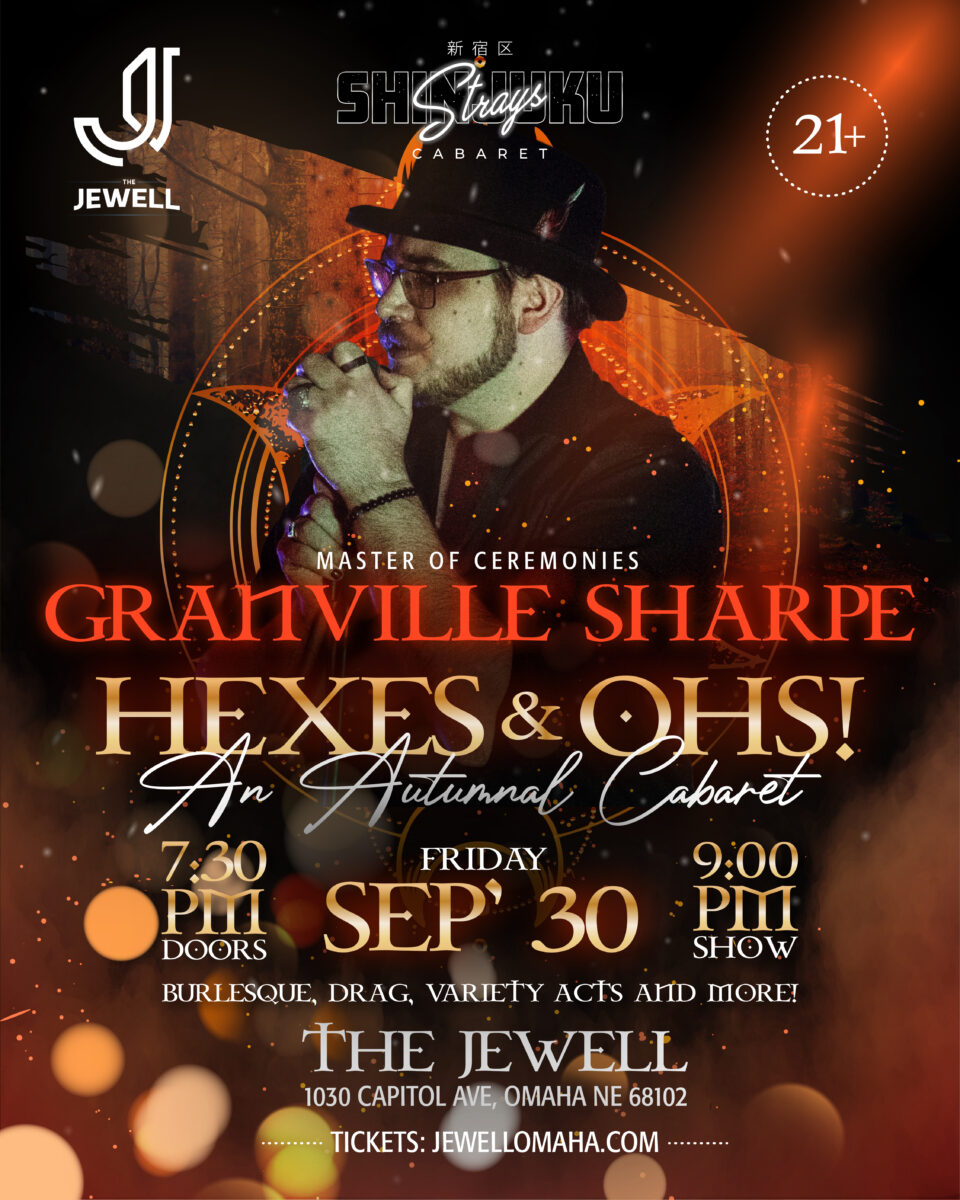 Duane Vosika (he/him) VIDEOGRAPHER: “Duane Vosika has always had a ‘focus’ on digital media, starting in photography 5 years ago and adding videography to his skills 3 years ago. This year alone, he has covered various music festivals as well as Flow Faire, Kosmic Kingdom, Rekinection Festival and Dancetopia Festival, just to name a few. He also travels to cover media for Norsefyre Circus Troupe, is the house photographer for the Max, the house videographer for Sultry Sundays at Alice and a contributor to the Reader Magazine.” 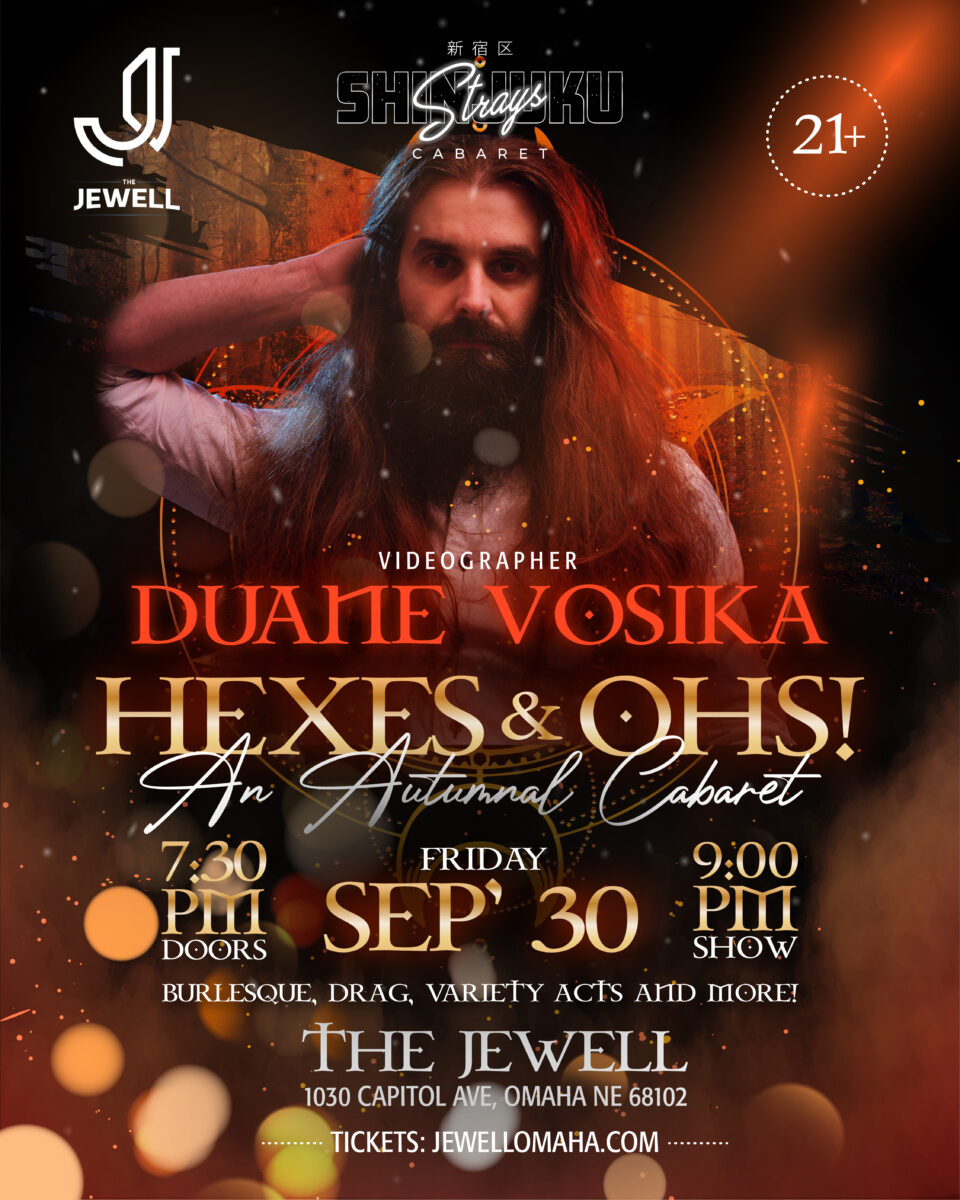 Hexxtina (she/they) STAGE KITTEN: “You may have seen native New Yorker turned Nebraskan lending her Stage Managing and kittening talents at many shows all over the Metro area. Not only does she have years of experience backstage but if you’re lucky, you can catch her stepping up to emcee or even doing a little shimmying while she serenades you in the spotlight.” 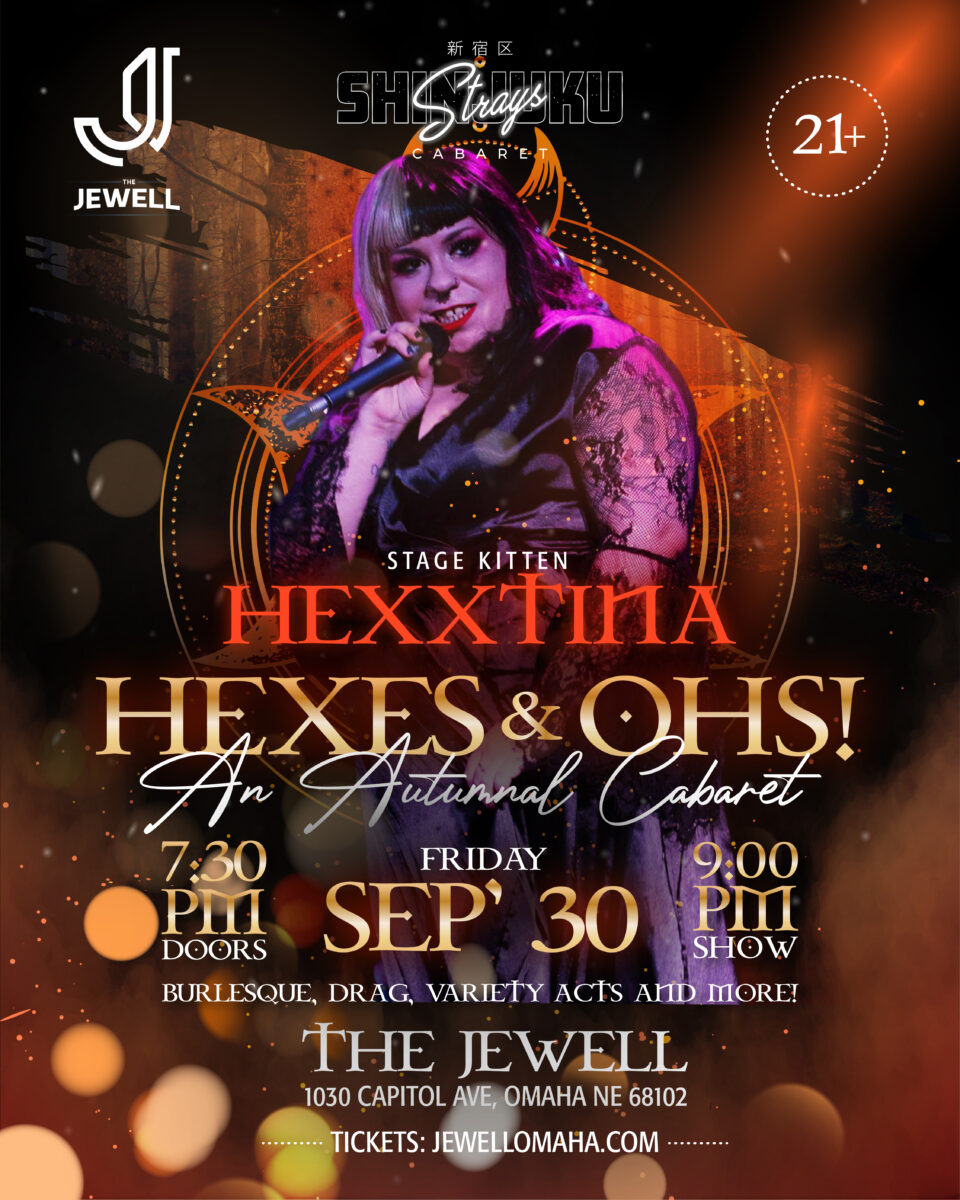 Maeve Lux (she/her) STAGE KITTEN: “A crafty witch who decided to emerge from her studio to create some magic for the evening – she’ll be out and about collecting offerings for our phenomenal performers, so keep your dollars out and ready and she’ll certainly pay you a visit.” 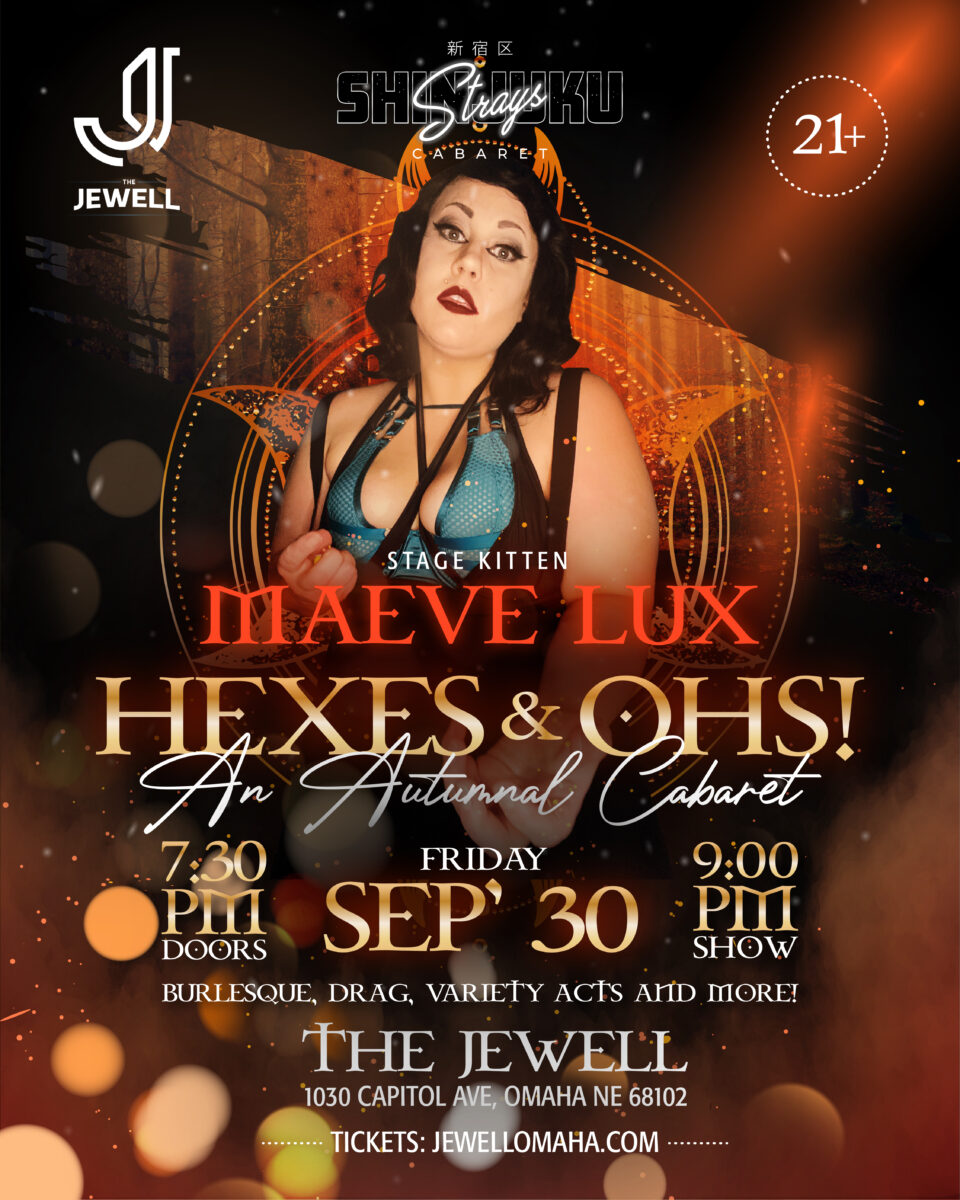 Isaac Reilly (he/him) PHOTOGRAPHER: “Isaac only recently started his foray into photography earlier this year, but is already turning heads. He loves being even just a tiny part of the burlesque community and being able to get shots for the talented performers. A performer of sorts himself, he has an upcoming show at The Edge of the Universe, on Sunday 9/25.”