$5 for college students, pay when you attend show by showing college I.D. 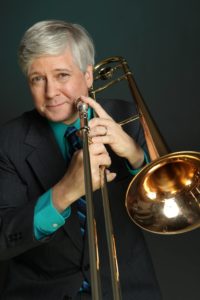 Based in Los Angeles, Scott Whitfieldis internationally recognized for his work with many contemporary big bands, including those of Toshiko Akiyoshi, Johnny Mandel, Clare Fischer, Bill Holman, Bob Florence, and his own Scott Whitfield Jazz Orchestra. Whitfield’s discography includes 10 recordings as leader and more than 50 recordings with other artists. Whitfield has appeared throughout the world, from Australia to Zurich, sharing his expertise on trombone technique, improvisation, composition, arranging, and jazz history. He has been featured as guest soloist with the United States Army Blues Jazz Ensemble and as a regular member of the Nat Adderley Sextet. His transcription book “The J.J. Johnson Collection” (published by Hal Leonard) has inspired not only trombonists, but also jazz improvisers on many instruments, young and old. More recently, he was part of the orchestra at the Hollywood Bowl for a special seventieth birthday tribute to Nancy Wilson, which also featured Nnenna Freelon, Patti Austin, James Ingram, Tom Scott, Terence Blanchard, Natalie Cole, and a host of others. www.scottwhitfield.com

Brett Stamps is the composer in residence for The Big Bad Bones. He is a proud alumnus of the Stan Kenton Orchestra and has performed with Tony Bennett, Aretha Franklin, Sammy Davis, Jr., Barry Manilow, The Temptations, and a host of other jazz and pop artists. Stamps can be heard on three different Kenton recordings and is a fixture in the St. Louis area music scene where he performs regularly in shows at the MUNY and Fox Theater. http://www.trombone-usa.com/stamps_brett_bio.htm.

Bass trombonist Steve Wilson hails from El Paso, Texas where he maintains a busy career as an educator and performer in all styles of music. For 10 years Wilson toured the world as a member of the Continental Trombone Quartet with performances in Brazil, Spain, China, Canada, Mexico, and throughout the United States. He has recorded on the Chase record label with the Jim Widner Big Band and on Albany records with the Continental Trombone Quartet.

Pete Madsen just completed his 19thyear as Coordinator of Jazz Studies at the University of Nebraska Omaha. He performs regularly with the Nebraska Jazz Orchestra and the Omaha Big Band. Madsen has recorded two CD’s on the Chase record label with the Jim Widner Big Band and can be heard on Conor Oberst’s award-winning Upside Down Mountain CD on Nonesuch records. Madsen has performed with Franki Valli, Aretha Franklin, Doc Severinsen, and Paul Schaefer to name only a few.

Pianist Ben Tweedt resides in Cincinnati, Ohio where he maintains an active career as a performer, composer, arranger, and educator. In addition to freelancing with the top local musicians in the greater Cincinnati area, he also leads his own trio and is a member of the Brandon Coleman Quartet, Spherical Agenda, and The Original Farm League Big Band. In April Tweedt won the Grand Prize at the 2019 American Jazz Pianist Competition. As winner of the top award Tweedt received prizes totaling more than $8,000, including a check for $6,000, a $1,200 check for three performances at Kessler Hotels, and a $300 travel allowance. www.bentweedtmusic.com

Omaha bassist Mark Haar can be heard with the Lincoln Symphony Orchestra, the Omaha Symphony, the Omaha Community Playhouse Orchestra, and the pit orchestras of various Broadway touring productions at the Orpheum Theater. Some of the jazz groups he has performed with include the Matt Wallace Quartet, the Nebraska Jazz Orchestra, the Omaha Big Band, and Novak & Haar with guitarist Jon Novak. www.novakandhaar.com

Doug Montera spent twenty-two years as an Air Force drummer performing across the United States and in Europe, Africa, and the Middle East. During this time he performed at the Guinness Jazz Festival, the Copenhagen Jazz Festival, the Caspian Sea Jazz Festival, numerous European jazz ensemble tours, the Royal Albert Hall, and for U.S. troops serving around the world. After retiring from the Air Force Montera worked a short stint with The World Famous Glen Miller Orchestra and now resides in Omaha performing with Finest Hour, the Ozone Big Band, and many other local and regional acts.