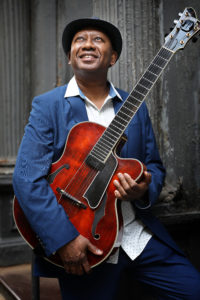 World-renowned, Seven String Jazz Guitarist, composer and arranger, Ron Jackson has performed, recorded, and taught music in over 30 countries. Jackson is likely the only African American seven-string jazz guitarist alive. His goal is to bring awareness to the instrument through education, music, and events.

As a musician, Jackson has mastered the six, seven, and twelve-string guitars and plays other fretted string instruments like the ukulele, banjo, and electric bass. He has been featured as a leader in jazz festivals all over the world, including the North Sea Jazz Festival, Edinburgh Jazz Festival, and Winter Jazzfest. Jackson’s influences include George Benson, Pat Metheny, Jimmy Page, and Jimi Hendrix. He has studied under the tutelage of Pat Martino, Barry Harris, Melvin Sparks, Mike Stern, and the seven-string master, the late Bucky Pizzarelli.

As a recording artist, Jackson has had a successful recording career, releasing eight albums. Beginning with the chart-topping “Guitar Thing” (1991) and “Flubby Dubby” (2008) which was recorded live with his Hammond Organ trio. His most recent release, the Jazzweek Top 100 album, “Standards And Other Songs” (2019) was his first as a leader on seven-string, incorporating traditional standards and jazz reimagining of radio-friendly pop songs, like Drake’s “Passionfruit”.

As an educator, Jackson provides education and awareness of the seven-string guitar – via Individualized instruction and free/low-cost educational resources comprising workshops and live-streamed micro-lessons across his social media channels. He also teaches six-string guitar classes to elementary students in NYC Public Schools, who would not otherwise have access to jazz.

These days you can find Ron performing for audiences with his band, teaching virtually and in-person, and hosting his popular weekly Instagram show Sunday Evening Jazz. In 2022  Ron will be on his “Whatever’s Open” Tour to coincide with his new album release, “Standards and My Songs” on February 25th, 2022. www.ronjacksonmusic.com

Jackson is “a seven string guitarist that tips the cap to the masters that preceded him… this cat is right on the money, right in the pocket and right on top of all the other clichés where bad means good.  A dazzling set that shows how little you need beyond real talent and chops to get your point across.”

“Jackson is a master of the seven-string, which puts him in the ranks of a select few” – Adam Perlmutter JazzTimes https://jazztimes.com/features/columns/ron-jackson-guitarist-seven-strings/

“Standards and Other Songs” is a work of pure art.” -Musical Memoirs

“it’s what he does with melody and structure that has me in awe.” – Carol Banks Weber Medium