RHYTHM COLLECTIVE is the Omaha area’s only Caribbean voice, formed around the singer-songwriter talents of Joseph Mitchell. Joseph, a native of St. Patrick’s parish on the island of Grenada, has performed with a number of bands in his home country and been a featured entertainer on cruise ships throughout the Caribbean. Joseph adds rhythm guitar and keyboards to the ‘RC’ sound.

​Bass guitar is handled by Frank Fong. Frank, a native of the island of Hong Kong, has performed with a number of bands in his home country. He is a muti-instrumentalist and composer whose skills and interests cut a wide swath musically and culturally. He has performed with the Blue Mangoes reggae band, the New Humans performing exclusively original materials, as well as many solo gigs. The band also performs some of Frank’s original works.

​Brent Vignery has been playing drums for 20 plus years. For 20 years he has played in several bands mainly in the Kansas City and Lawrence, KS areas. Past bands include Devon Allman, Duncan Hill Band, Russell Sawyer, The Used Cadillac’s, Boxley Brothers, and Nathan Brooks. Some of Brent’s biggest inspirations are Vinnie Calaiuta, Steve Gadd, John Bonham, Go-Go Ray, Stewart Copeland, and many more.

Omaha-born guitarist, John Green, has been listening to and playing reggae music for over 30 years. Most recently, John has been part of the Omaha music scene in such projects as Soul Plexus, the Bishops, the Transcendentals, New Humans and Astral Train. Although from the Midwest, playing ska, reggae and island music has been a long-time passion of John’s through its universal message of peace and equality. John has had the privilege to open for such reggae and ska legends as Luciano, Chaka Demus & Pliers, the Wailers, the Skatalites, Monty Montgomery, Yellowman, Wailing Souls and many more 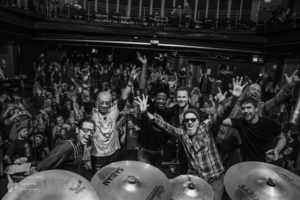