$5 College Students, Tickets can be purchased on site when showing student I.D. 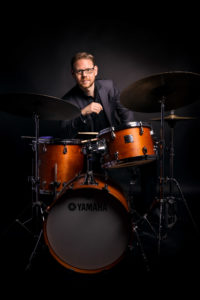 Kyle Asche – Guitar
Kyle Asche has performed with Wynton Marsalis and Jazz at Lincoln Center, Melvin Rhyne, “Killer” Ray Appelton, Chris Foreman, Victor Goines, George Fludas, Ben Paterson and many others.    While Asche is a versatile guitarist adept and comfortable in many different genres, the tenets of his style often find him in the company of many of Chicago’s premier jazz vocalists and Hammond organ bands.
Mitch Towne – Hammond Organ

Mitch Towne is a keyboardist and touring musician, and is widely considered as the “go-to” Hammond organist in the Midwest. His ability to move seamlessly between diverse styles has made him a sought-after side-man with artists as varied as jazz/R&B artist and Grammy-winning producer Terrace Martin, jazz heavyweights Ryan Kisor, Dave Stryker and Adam Larson, blues artists Eric Gales and Ben Poole, and multi-platinum artist Aloe Blacc. In 2015,Towne played organ on the track “Push” for the album “Velvet Portraits” by Terrace Martin, which was nominated for a 2016 Grammy for “Best R&B” album. Towne is an endorsing artist for Crumar Instruments, Motion Sound Amplifiers and Lounsberry Pedals.