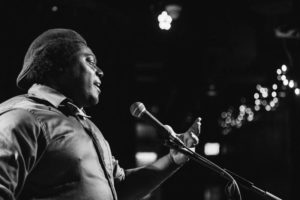 Devel (Developing) Crisp is a spoken word artist born and raised in Omaha, Nebraska.  He wrote hip-hop verses in high-school and was inspired by HBO’s Def Poetry Jam to perform them a cappella at open mics.  He joined a coalition of poets in 2009, dubbed “The Wordsmiths”, in which he still performs locally.  In 2013, he became a Teaching Artist for the Nebraska Writers Collective, where he has shared and coached poetry in various schools, prisons, and businesses.  In 2014, he earned a residency at the Bemis Center for Contemporary Arts and has competed around the United States as a member of the Omaha Slam Poetry Team.  He went on to win an Omaha Entertainment and Art Award in 2017 for Best Performance Poet.  Crisp is known for his carefully crafted wordworks delivered in a powerful, vibrant style. Think Rembrandt meets DMX! Always searching to find interesting and fresh ways to tell a story and deliver a message, Devel Crisp seeks to unconventionally meld emotion with aptness, all in the name of reflection, amusement, change, and progressive art.
https://www.youtube.com/watch?v=_mJYo47TJyo
HEADLINER
Courtney Bryan, composer and pianist
www.courtneybryan.com 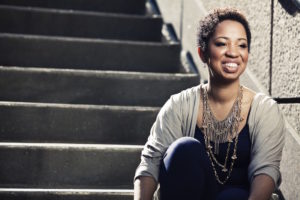 Courtney Bryan, a native of New Orleans, La, is “a pianist and composer of panoramic interests” (New York Times). Her music ranges from solo works to large ensembles, film scores, and collaborations with dancers, visual artists, writers, and actors, and is in conversation with various musical genres, including jazz and other types of experimental music, as well as traditional gospel, spirituals, and hymns. Focusing on bridging the sacred and the secular, Bryan’s compositions explore human emotions through sound, confronting the challenge of notating the feeling of improvisation. Bryan has academic degrees from Oberlin Conservatory (BM), Rutgers University (MM), and a DMA in music composition from Columbia University of New York, with advisor George Lewis. She has been an instructor at Columbia University and Oberlin Conservatory, and a Postdoctoral Research Associate in the Department for African American Studies at Princeton University. Bryan is currently an Assistant Professor of Music in the Newcomb Department of Music at Tulane University, and the composer-in-residence with the Jacksonville Symphony. She has two independent recordings, “Quest for Freedom” (2007) and “This Little Light of Mine” (2010).