NO FOOD SERVICE Kitchen closes at 9:30pm,  Beverages will be served and is not included in music fee. 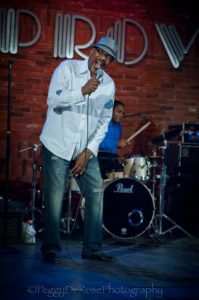 Ron E. Beck was born and raised in Omaha, Nebraska. At age eighteen, after reaching the top of the Omaha music scene Beck decided to go west along with his twin brother Donnie. The brothers followed their mentors Buddie Miles, Herbie Rich, and Stemsie Hunter to the West Coast, all of whom had just joined Michael Bloomfield’s Electric Flag. Since the 70’s Beck has been an established and welcomed contributor to the Northern California music scene.

1975 through 1978 toured and recorded with the highly acclaimed group

Ron E. Beck has also performed and recorded with . . .

Known primarily as a funky drummer, Ron E. is also an accomplished singer whose vocal style has been praised by such notables as Tom Bell, Carlos Santana, Steve Cropper and Wallace ‘Scotty’ Scott of the Whispers.

Ron E. is currently in the final stages of his 5thCD release, Ron E. BeckDNA.

On this latest effort, Beck produced, is playing drums and singing. This endeavor is about Ron’s legacy. It features members of his immediate family, his Mom, Jeanne Rogers, his twin brother Donnie, 1 of his 3 Daughters and 3 of his Grandchildren all of whom are musically talented. The songs on this project tastefully covers the music spectrum from Ol ‘Skool Jazz through R&B to Hip-Hop. Definitely worth a listen!

Beck continues to gig internationally and is now taking select drum students as a part of his mentoring program, the Ron E Beck Drum Institute (ReBDI).