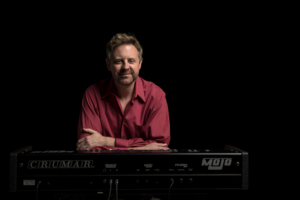 Mitch Towne is a Grammy-nominated keyboardist and touring musician, and is the “go-to” organist in the Midwest. His ability to move seamlessly between diverse styles has made him a sought-after side-man with artists as varied as jazz/R&B artist and Grammy-winning producer Terrace Martin, jazz heavyweights Ryan Kisor, Dave Stryker, Adam Larson, and Marcus Lewis, blues artists Eric Gales and Ben Poole, and multi-platinum artist Aloe Blacc. In 2015, Towne played organ on the track “Push” for the album “Velvet Portraits” by Terrace Martin, which was nominated for a 2016 Grammy for “Best R&B” album. Towne is an endorsing artist for Crumar Instruments, Motion Sound Amplifiers and Lounsberry Pedals.