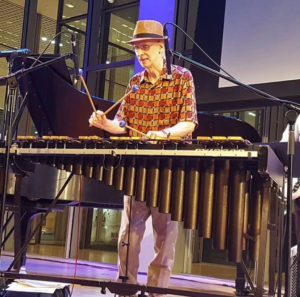 Vibraphonist and composer Mike Freeman has been a part of the New York jazz and Latin music scene for over three decades. Dan McClaneghan of Allaboutjazz described him as “masterful” and ranked among other top names of the instrument. With spirited soulful swing, Mike Freeman’s performances have taken him from North America and Europe to the Azores, Caribbean, and South America. His recordings of original music have gained national and international attention with extensive radio airplay charting on jazz, contemporary jazz, and World Music radio. “Blue Tjade,” a tip of the hat to Cal Tjader, followed by “Venetian Blinds,” with music for El Rey Tito Puente and NEA Jazz Master Bobby Hutcherson, are the latest in a line of clave-infused recordings Mike has produced.

A 2019 Lower Manhattan Cultural Council grant recipient Mike produced the two concert series “Latin Music In Hell’s Kitchen, A History” with guest legends Ray Mantilla and Jose Mangual Jr. performing at the Times Center. He’s also produced two Band Together benefit concerts. One for musicians affected by hurricanes Harvey, Irma, and Maria with proceeds going to the Jazz Foundation of America and the other after Hurricane Katrina, benefitting the Tipitinas Foundation and New Orleans–area musicians.

Other endeavors include writing a decade-long series of commissioned compositions and arrangements for the Chicago Symphony Orchestra’s Percussion Scholarship Program. In 2014 he was commissioned by the late drummer/educator Ed Uribe to write arrangements for a national percussion curriculum for China that were performed by members of the Shanghai Symphony at Shanghai Symphony Hall.

Mike is also known for his work and recordings with several acclaimed Latin groups. The vibes behind the name, he’s worked extensively with legendary percussionist Ray Mantilla’s Good Vibrations Band, touring much of Italy. ”Good Vibrations,” Savant Records, was Jazzweek’s top Latinjazz recording on radio in 2006. Mike is featured with Ray’s Tres Amigos and also appears on “High Voltage,” Savant, as well as an upcoming 2020 release. He was part of Lucho Cueto’s all-star group Black Sugar, “Estamos Azucar,” which gave blockbuster performances for thousands at the Toros Y Salsa Festival in Dax, France, and at the Festival Internacional de Salsa in Lima, Peru. For seventeen years he’s been a member of Jose Mangual Jr.’s Son Boricua featuring the late Jimmy Sabater (one of the architects of Boogaloo) that performed for large gatherings at salsa congresses in New York, L.A., and Atlanta. His vibe work can also be heard on recordings with Mark Holen’s eclectic Latin blues band Zambomba. In the 1990s he created the book for, and performed with, Jorge Jimenez’s salsa group Timba Vibes. This was followed by a twenty-year association with salsa singer Julio Salgado. He performed with the Spanish Harlem Orchestra (directed by Oscar Hernandez) at Madison Square Garden and with Willie Villegas’s Joe Cuba Sextet for New Jersey’s salsa congress, both with legendary sonero Cheo Feliciano.

Born and raised in Omaha, Nebraska, Mike Freeman is a Burke High alum. As a teenager he was a percussionist for the Omaha Symphony under conductor Thomas Briccetti.
“Latin jazz doesn’t get any better than this”
–Mark Sullivan, Allaboutjazz
“Swinging sounds that are reminiscent of vintage Cal Tjader sessions…irresistible grooves. Oye!”
Jazz Weekly November 1, 2018 –George Harris