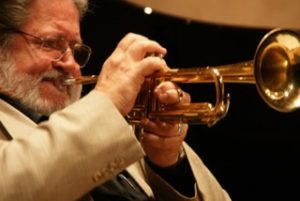 Born Albuquerque, NM. Started guitar at age eight but switched to trumpet at age ten. At age twelve, asked to play in a local “dance band” for weddings and dance gigs. Discovered improvisation at first rehearsal. The love affair with jazz started there and has become the driving force in Bobby’s life.

Elected into New Mexico Music Hall Of Fame. Numerous (3) Grammy nominations and 1982 Received Jazz Album Of The Year award from RIANZ ( New Zealand ). In 2014 awarded the Lifetime Achievement Award for Performance and Education from the International Trumpet Guild as well as the Lifetime  Jazz LeJENd Award from the Jazz Educators Network. Also awarded an Honorary Doctorate Degree from Elmhurst College in Elmhurst, Illinois.