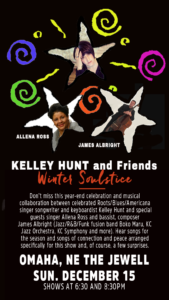 Celebrated Roots / Blues / Americana singer songwriter and piano player Kelley Hunt brings a unique night of music titled “Kelley Hunt and Friends Winter Soulstice” to The Jewell.  It’s a special program of seasonal selections, arrangements and even new music – songs matched to the holidays, the winter season and themes of peace and connection.  This is not a recitation of your favorite carols, it’s a deeper dive into material chosen to reflect and interpret how we all feel this time of year.  Joining Kelley will be eminent bassist James Albright (KC Jazz Orchestra, fusionists Boko Maru, KC Symphony) and singer Allena Ross.  Over the past few years “Winter Soulsice” has played to sold-out crowds.  This promises to be very special musical experience – don’t miss it! 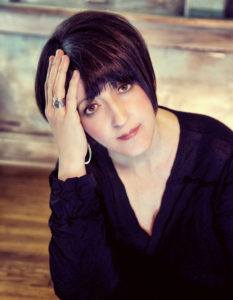 BLENDS ROOTS, ROCK AND SOUL IN HER CINEMATIC NEW ALBUM
THE BEAUTIFUL BONES

LAWRENCE, KS — Kelley Hunt’s new album, The Beautiful Bones, offers a dozen superbly crafted songs that blend timeless music with a contemporary perspective – drawing a bead on modern life with grace, humor and gravity through the earthy poetry of her lyrics. Those songs are buoyed by a performing style that balances Hunt’s virtuosity with the down-home gospel, soul and R&B that’s part of her DNA.

The title track is a perfect example of Hunt’s art, with its shimmering guitar and B-3 organ providing a gorgeously textured canvas for her haunting, soulful voice. And its storyline is an equally deep illustration of her multi-faceted writing, celebrating both the joy of life and its impermanence, while quietly reminding that the Earth is a delicate and mortal place that must be tended to flourish.

“That song was the key to the album’s identity,” Hunt explains. “I had already written most of the songs, and felt they were about the things that are important to us all as people, but ‘The Beautiful Bones’ connected them. I was inspired by looking out my kitchen window while I was playing guitar and seeing the bare branches of a tree covered in snow, and I started to think about the layers we all have in our lives and the possibilities that come with each of them. Fifteen minutes later the song was done.”

The album repeatedly returns to pivotal moments, from the central question “what will we do with this truth and these tears” asked in “The Beautiful Bones” to, in “Gates of Eden,” the flash when a glance off the road nearly causes a cataclysmic accident to, in

“Let It Rain,” the realization that — whether we know it or not — life truly does give us everything we need.

“As human beings, we get so attached to the material world that we forget the most important things,” says Hunt. “The pivotal moments give us clarity. They help us understand that at the end of the day the only things we really have are our lives and our souls.”

Both heart and soul are in abundance on The Beautiful Bones, Hunt’s sixth album and an evolutionary step in her songwriting and arranging. The set’s seamless integration of her influences — from the wooden-church-pew gospel of Mahalia Jackson that resonates in “Release and Be Free” to the classic Memphis soul of “The Sweet Goodbye” to the boogie-woogie of the Tea Party skewering “I’ve Got a Good Feeling” to the driving R&B anthem of self-realization “This Time” — captures Hunt at the apex of her skills, abetted in her performances by the A-team of session musicians she assembled in Nashville’s 16 Ton Studios.

Some of those players are already familiar to Hunt’s growing legion of fans. Drummer Bryan Owings played on 2011’s Gravity Loves You and 2008’s Mercy, and has toured and recorded with Justin Townes Earle, Emmylou Harris, Delbert McClinton, Shelby Lynne and a host of other roots music legends. Veteran Hammond B3 player Mark Jordan (Van Morrison, Bonnie Raitt, Delbert McClinton, Taj Mahal) was a stalwart on both Mercy and Gravity and is a regular on Hunt’s live stage, and Detroit transplant bassist Tim Marks, who claims credits ranging from roots music stars and eminent singer songwriters to Taylor Swift also had a previous role on Gravity. The McCrary sisters, the three daughters of Sam McCrary, the founder of the historic gospel group the Fairfield Four, also appear, lending their angelic voices to three numbers. Regina McCrary is also a veteran of Bob Dylan’s touring band and sang on his album, Shot of Love. Another former Dylan band member, John Jackson, is a new addition to Hunt’s studio ensemble.

“He was a perfect fit, with that rare combination of chops, an authentic roots vocabulary and the ability to work right on the edge,” says Hunt.

Typical of Hunt’s open-minded studio aesthetic, a slide guitar line Jackson improvised after the band played through “Golden Hour” for the first time quickly became the song’s bloodline, working as a foil for Hunt’s own New Orleans-style piano.

Hunt’s versatile keyboard and guitar playing provides the album’s own beautiful bones, connecting all its songs with the limitless architecture of her style. She was born in Kansas City, Missouri, in the same environs as Charlie Parker, Count Basie, Mary Lou Williams, Pat Metheny and a host of other great American musicians. Her parents constantly played jazz, soul, R&B, blues, pop and gospel records at home, where they hosted jam sessions, and Hunt’s grandmother sang gospel music in New Orleans and toured with a choir.

Hunt absorbed all of this, and started making up songs and playing piano when she was four. Her first band experiences were in high school, where she moved rapidly from academic ensembles to teenage rock ‘n’ blues groups, playing dances for her peers. One night, when the singer for the band she was working with failed to show up at a gig, Hunt also graduated to front woman and bandleader — a role she’s excelled at ever since. In college, she studied music composition and vocal performance, laying the technical foundation for the formidable skill set she brings to the stage playing nearly 100 shows a year.

Starting with 1994’s Kelley Hunt, she has developed a reputation as a torchbearer of authentic, straight-from-the-heart music with deep roots that transcend limitations of genre. That has been her passkey to building a fan base through both radio play and performances at clubs and at roots and pop music festivals throughout the United States, Canada and Europe. She has also been a guest DJ on Sirius/XM Radio’s “B.B. King’s Bluesville” and made six appearances on American Public Media’s popular A Prairie Home Companion.

“My goal is to continually grow as an artist, and The Beautiful Bones is part of that,” Hunt says. “I’m also aware that my music exists to serve other people, the way that the music of all the artists that I loved while I was growing up served me. Ultimately, that’s really what is most gratifying.”

“…Hunt’s vocals and captivating piano playing work together lift each composition to gravity-defying heights.
With each new release – this is her fifth – Hunt’s velvet-smooth voice si further defined.” “This is a superb produc- tion with the subtle colors Hunt is famous for…” BLUES REVUE (Jul/Aug ‘11)

“Hunt’s latest CD (GRAVITY LOVES YOU) sounds like her best yet – which is high praise considering the quality of her 2009 release, “Mercy”. Hunt’s songwriting shines on powerful, moving compositions like “Deep Old Love,” “This Fall,” “In the End” and the title cut. And she proves she can shine on the keyboard as well – with dynamic inspired playing throughout.”

“Kelley Hunt delivers the goods with a voice that grafts passionate blues to scorching soul – instantly endearing her to all within earshot, as her band surrounds her in a greasy funk that completes the package and brings you back for more. ‘GRAVITY LOVES YOU’ continues this tasty tradition and ups the ante once again.”
Eric Thom BLUES REVUE, SING OUT!, MAVERICK, PENGUIN EGGS, ROOTS MUSIC CANADA

“Kansas City roots singer Kelley Hunt is equally impressive as soulful, throaty vocalist and an aggressive, gospelly pianist. She showcases her songwriting prowess on the nicely nuanced ‘GRAVITY LOVES YOU’, due Feb. 15. ‘Deep Old Love’ finds her in a bluesy medium-tempo Bonnie Raitt groove. ‘I’m Ready’ is a tent-revival piano boogie. ‘In The End’ is a gorgeous gospel benediction.”
THE MINNEAPOLIS STAR-TRIBUNE