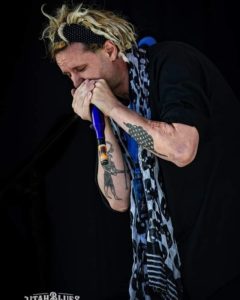 A little back story
Jason Ricci is one of the most popular harmonica players on the planet today. His music is listed in almost every
top ten play-lists on college, blues and internet radio. Jason is a’players player’ his biggest fans are other
musicians, from all genres. Jason Ricci is in the spot light and on the lips of critics, artists and fans everywhere. Through two plus decades of endless touring, TV appearances, recordings and social media Jason Ricci’s style
of playing is so revolutionary and influential that there exists an entire new generation of players imitating his music, clothes, gear, and even stage presence. Jason has been an almost constant force for decades in the studio, festivals, club dates and press. Through performing, song writing, teaching, harmonica prowness and activism in the fields of mental health and addiction, it is not an overstatement that this young man is currently changing the world
through his music and education. His over blowing harmonica technics are second to none and his song writing,
while based in deep blues, is contemporary, relevan_t & boundless. With his personal demons well in check and the support of his Killer band,’the Bad Kind’,Jason is back with a vengeance. On this, their 2nd release on Ellersoul Records, they’re taking no prisoners, from low down in the alley to out of this world their chops are rolling. Recent Accomplishments:

Jason Ricci is one of the most popular harmonica players on the planet. His music is listed in almost every Top-10 playlist on college, indie and blues radio. Jason is an award-winning artist, in the spotlight and on the lips of critics and peers — the new Harmonica King! Rock, blues and beyond!

My Chops Are Rolling

“. . . this gang is for people that want to have more to their music than a bunch of beats. Hard hitting stuff that’ll bowl you over with ease as this new harmonica king continues to make his mark.”
http://midwestrecord.com/MWR1549.html

Jason Ricci and the Band Kind

My Chops Are Rolling

“It is good to hear this band playing just as well as they ever have . . Jason, as usual, is still the best harmonica player I have ever heard, and a strong vocal performer too.”

“. . . [Ricci]plays the blues differently than many, . . .his own hybrid style . . .that makes everything accessible to even the most casual listener.”