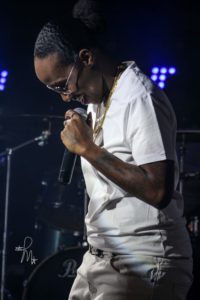 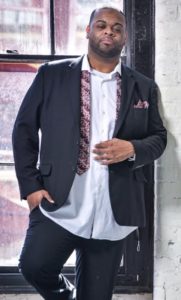 While growing up in Omaha, Nebraska, for as long as he can
remember, Justin Blackson can remember being addressed as Jus.B;
so performing under that name is second nature. Justin didn’t start
out singing as a young child as many have; his singing career started in
junior high school when he decided to audition for the school talent
show at the end of his 8th grade year. From there, it was evident for
Justin to turn Jus.B into a performing artist. Jus.B promptly joined his
high school choir and with his rich, lush baritone vocals, he quickly
became a favorite of his choir director, who provided additional instruction to help Justin increase his higher register as well as solidify his lower. Jus.B partnered with a local M.C. friend and they both wrote and performed together. This friend introduced him to a local producer and studio owner who took a special interest in working with Jus.B. At that time, MySpace.com was a popular social media avenue that many out of town artists used to collaborate with Jus.B to write and lay hooks on their music. With this growing popularity, Jus.B decided to form an acapella troop, Solo. As Solo’s fame grew, an NBC producer caught wind of the group and they were the first performers chosen to participate in the pilot series of the NBC show- “The Sing-Off!” From there, Jus.B attended Mississippi Valley State University. In keeping with his singing roots, Jus.B sang with the University Choir, the renowned Valley Singers, T.H.I.S Acapella, Perfected Praise Gospel Choir, along with many others. During his tenure at Valley, Jus.B pledged Alpha Phi Omega, to continue providing community service especially with his musical talents in writing, arranging, and vocal techniques.

In 2015, Jus.B teamed with the artist Latin Threat to co-write the single, “I’m A Threat,” which featured Jus.B. “I’m A Threat” stayed relevant on the major music blogs for close to a month, garnering great reviews. In early 2016, Jus.B released his debut album,
“PartySoul,” a mixture of R&B/Soul with modern Hip-Hop and Trap. Currently his singles, “I Need Your Love” and “Secret” are both circulating on all major digital platforms laying a foundation for his upcoming project.