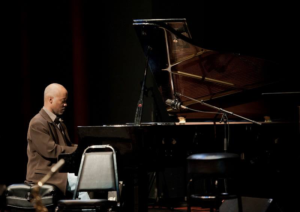 Everett Freeman, Jr. attended the Conservatory at the University Missouri-Kansas City where he was the recipient of the George Salisbury Scholarship, and also received the NARAS Grammy award for production of the song “Begging the Shadows.”

Hallmark named him as a young and upcoming Kansas City musician following the tradition of the legendary Jay McShann. He also spent time as the musical director in the one-man show Paul Robeson, which played in theaters first in K.C. later moving on to the East Coast performing to sold out audiences every night.

He has toured with Oleta Adams and has performed extensively in the Netherlands, the West Indies, Brazil, Costa Rica, Japan, and Turkey, and has performed in some major Jazz Festivals both inside and outside the U.S., the most memorable being the North Sea Festival in Holland.

In Kansas City, Everett Freeman Jr. performs locally with the Jazz Disciples, and continues to be one of K.C’s favorite sidemen, performing with nearly all the great female vocalist of Kansas City. And now, he performs regularly with his own band Eclipse.

Ever evolving, Everett Freeman Jr. is not only a jazz pianist but also a contemporary jazz and rhythm and blues vocalist.