*$5.00 Valet parking located at the entrance of the Marriott, mention The Jewell and they will provide a ticket that we validate. 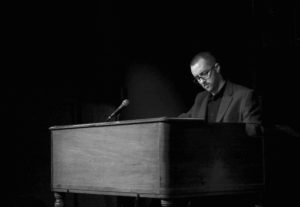 Some things in life are just meant to be.  The first time Chris Hazelton experienced a real Hammond B-3 organ, he knew instantly that it was the instrument he was destined to play.  At the request of his college professor, the then-underage aspiring musician snuck into a dark Kansas City jazz club called Bobby’s Hangout to hear the man behind the console, jazz organ master Everette DeVan.  After several weeks of coaxing, Mr. DeVan agreed to take Chris on a student, showing him the ins and outs of the complex machine. With a background in string bass and piano, Chris’ transfer to organ was a natural one.

From 2007 to 2009, Chris called the Big Apple home.  New York City provided an education that can only be found by living there.  The rhythm of the city and the constant presence of jazz royalty helped sharpen his playing into a potent combination of groove and artistry.  During his time there, Chris regularly performed at legendary Harlem jazz clubs such as Minton’s Playhouse, the Lenox Lounge, and Showman’s Jazz Lounge.  In 2009, Chris had the honor of studying with the world’s foremost authority in the jazz organ world, Dr. Lonnie Smith!

Upon returning to his native Kansas City, Chris has made a name for himself as one of the premier jazz organists in the midwest and recently made an appearance with the Kansas City Jazz Orchestra at the Kauffman Center for the Performing Arts

His flagship ensemble, Chris Hazelton’s Boogaloo 7, was assembled in 2013 and has since held a Friday night residency at Kansas City’s most happenin’ jazz spot, the Green Lady Lounge.  This seven piece unit focuses on funky, rhythmic soul-jazz that harkens back to the late 1960’s and early 1970’s, a time when Lou Donaldson, Jimmy McGriff, Charles Earland, Grant Green, Lonnie Smith, and a host of others packed dance floors and venues along the “Chitlin Circuit”.  The Boogaloo 7 has released two 45rpm 7-inch vinyl singles and two full-length LPs on Sunflower Soul Records, a label established by Hazelton in 2014 that produces soulful recordings with unashamedly old-school, analog vibe..

Since 2010, Chris has been the organist at “The Historic” Centennial United Methodist Church in the 18th & Vine Jazz District of Kansas City, MO – a church that was once home to Count Basie and Charlie Parker.  He is happily married to the love of his life, Erica, and together have a 2-year old daughter named Evelyn. 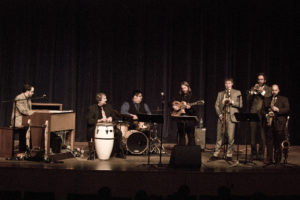