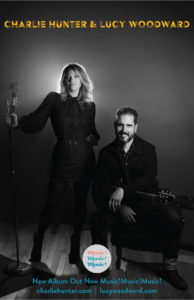 An exhilarating blast of blues, soul and funk, Music!Music!Music! marks the recorded debut of the musical partnership between guitarist Charlie Hunter and vocalist Lucy Woodward.

The duo first performed together in January 2018, when Woodward — fresh off supporting her fourth solo album, 2016’s Til They Bang on the Door — joined forces with Hunter as a last- minute fill-in on a tour he’d originally booked with Mexican singer-songwriter Silvana Estrada (whose visa application had been denied by the U.S. Department of Homeland Security).

Bonded by their shared love of blues, Hunter and Woodward quickly constructed a setlist of favorite songs and hit the road. Within less than a week of playing shows together, they realized that they’d hit upon something very special, indeed.

Hunter and Woodward will return to the road this spring to take Music!Music!Music! to the people. The tour for the album will stretch over much of 2019, with the duo going to Europe and Japan as well as all over North America. 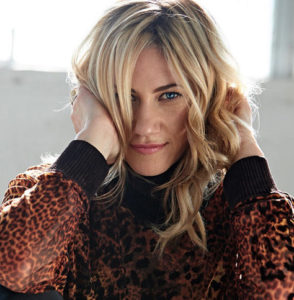 A LITTLE BIT ABOUT LUCY.

Born in London, Lucy spent her childhood in New York and Holland. She is the daughter of two classical musicians – her father a conductor and composer, her mother an opera singer, musicologist, teacher and bellydancer. No matter which household she was living in, she was “always music-making and creating.”

Fresh out of school, she was singing jazz in NYC’s West Village for tips, singing in cover bands and writing songs before signing with Atlantic Records (2003) —a time period that saw her score a Top 40 hit with “Dumb Girls” and another Top 5 hit she wrote for Stacie Orrico called “(There’s Gotta Be) More to Life”, earning her 2 BMI Awards. With her debut record in tow, she toured the US, Japan and New Zealand and appeared on The Tonight Show with Jay Leno.

But Woodward had no desire to be a pop starlet: her follow-up, the jazzier, punchier indie record Lucy Woodward is…Hot and Bothered was released in 2008 which “she new light” on music-making again. Hot and Bothered was inspired by her days at Manhattan School of Music, lots of Etta James and the 1967 classic animated film The Jungle Book bringing her back to her bluesy roots. Billboard described how “Lucy’s a ball, equally appreciable for fans of melodic sing-along baubles and highbrow aficionados of finely honed musical composition. A sonic turnstile that flips through dreamy pop, jazz and bluesy bebop”.

This, in turn, was followed by Hooked!, an album of Brill Building meets Big Band songs, released on Verve/Universal (2010) — which was largely produced by Tony Visconti (David Bowie). The album effortlessly moves across multiple genres, including gypsy-swing, jazz and rhythm & blues. Along with her self-penned compositions, the album showcases Lucy’s stunning covers of Peggy Lee’s Cuban-inspired “Sans Souci” and an a cappella Hoagy Carmichael classic, “Stardust.” Nellie McKay, who Lucy had always been a hardcore fan of, wrote a song for her called “Another Woman” which Lucy recorded on Hooked! as well (featuring Nellie on background vocals).

In 2012,  Lucy was asked to tour as a band member filling in for the lead singer of Pink Martini learning songs in Turkish, French Croatian, Japanese and Spanish with 6 days notice. Lucy’s dates with Pink Martini varied from Montreal Jazz Fest to singing with the San Francisco Symphony for several performances. That same year, Lucy has also toured overseas sponsored by Armed Forces Entertainment, performing for American military units stationed in Spain, Italy and Turkey.

Lucy met Snarky Puppy bandleader Michael League, who played bass in her NYC band at the time. She started opening for Snarky Puppy (with them as her backing band) and was featured on Snarky Puppy’s Family Dinner, Vol. 1 album singing the hauntingly bluesy “Too Hot To Last”, earning them their first Grammy. League and longtime friend keyboardist/arranger Henry Hey (Forq, Rudder, David Bowie) co-produced her fourth solo album Til They Bang on The Door, which was released on GroundUP/Verve/Universal in 2016. The album features the Snarky Puppy horns, Cory Henry on organ and Grammy nominees trombonist Alan Ferber and cellist Dave Eggar as well as many other musicians in their NYC community. She continues to tour with Snarky Puppy and Forq.

In 2017, Lucy debuted her material with Big Band arrangements from two of  her albums performing at Aarhus Jazz Festival and Jam Days with TipToe Big Band in Denmark, Holland and in Los Angeles with The Dave Richards Big Band. She was also invited to perform a concert collaboration with Germany’s WDR Big Band (featuring arrangements/conducted by Chris Walden) in the Fall, 2018. Throughout 2018, Lucy will be touring with The Charlie Hunter Trio and they will also record in the Fall, 2018.

In addition to her solo career, Woodward toured with Rod Stewart for many years singing background vocals. She has also sung on albums by Celine Dion, Nikka Costa, Chaka Khan, Barbra Streisand, Carole King, Joe Cocker and Snarky Puppy. Her songs and vocals have been heard in many movies including What a Girl Wants, The Blind Side, Music and Lyrics, New Year’s Eve, First Daughter, Last Vegas and Disney’s Ice Princess, with her rendition of Bjork/Betty Hutton big band cover “It’s Oh So Quiet.”