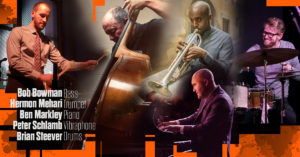 Hermon Mehari’s anticipated debut album as a leader, “Bleu”,marks a new era in his career. The music covers both the ground of his contemporaries and his own original music in such a way to illustrate his current musical path. Mehari was the recent winner of the 2015 Carmine Caruso International Trumpet Competition and a semifinalist in the 2014 Thelonious Monk Jazz Competition. In 2014 he released the CD “Our Journey” with Diverse,his second with the group. Mehari maintains a touring schedule around the world with his own group and as a sideman.

Mehari was also the winner of the 2008 National Trumpet Competition and placed 2nd in the International Trumpet Guild competition in Sydney,Australia. As a founding member of Diverse,whose eponymous debut album on Seattle-based Origin Records reached the Top 40 on the Jazzweek Radio Charts,he has performed professionally with noted saxophonists Jaleel Shaw,Logan Richardson,Bobby Watson, Ben Van Gelder,and Tivon Pennicott. He has also performed with Aaron Parks,Joe Sanders,Hubert Laws,Randy Brecker,Tony Tixier,Dave Pietro,Clay Jenkins and many other great musicians.

Hermon Mehari received his BM in Jazz Performance from the University of Missouri – Kansas City Conservatory of Music and Dance in 2010. In addition to performing,he dedicates himself to being a serious educator and has participated in clinics and panels around the world.

Ben Markley,a jazz pianist,has performed with Brian Lynch,Greg Osby,Eddie Henderson,Terell Stafford,and George Garzone. Markley’s latest recording project is Clockwise: The Music of Cedar Walton (OA2 records).  Markley,along with special guest trumpeter Terell Stafford,celebrates one of the more influential and beloved figures in jazz through this unique project,showcasing many of the late pianist and composer Cedar Walton’s most revered tunes through new arrangements for big band. Performing iconic compositions such as ‘Hindsight,’ ‘Bolivia,’ and ‘Holy Land,’ Markley brings together fellow faculty members from the University of Wyoming and top-flight Denver-area musicians to produce an honest and swinging recording that honors Cedar Walton while presenting his music in a bright new light. The album received great critical acclaim and was selected as one of the best 4 star rated albums of 2017 by DownBeat magazine.

Markley is active as a composer and arranger with many big band and vocal jazz charts published through UNC Jazz Press. Recent arranging commissions include the Jazz Orchestra of Philadelphia and Wyoming Jazz Educators All-State Jazz Band. Compositions from Markleyʼs first two albums have earned him ASCAP Young Jazz Composers Awards. Markley was selected to participate in the Betty Carter Jazz Ahead program held at the Kennedy Center.

Markley is an active performer in the Denver-metropolitan area and along the front range and he currently serves as Director of Jazz Studies at the University of Wyoming.

Peter Schlamb is a vibraphonist and pianist based in Kansas City,MO. He is one of the most appreciated musicians in KC area and maintains a busy schedule performing locally,nationally and internationally. Peter spent several years in New York where he attended and graduated from New School University. During his time in New York,Peter recorded and performed with artists including David Binney,Mike Moreno,and Ben van Gelder. Peter currently leads the group Electric Tinks and is a member of the Ben van Gelder Quintet as well as frequently performing with several other ensembles. He released his debut album “Tinks”in 2014 and “Electric Tinks”in 2018.

Brian Steever is a Kansas City-based drummer who brings a spark of imaginative propulsion and a lift of fluid motion to improvised music performances of all kinds. Artists from around the world, including Steve Cardenas, Bob Bowman, Addison Frei, Matt Otto, Hermon Mehari, Peter Schlamb, Deborah Brown, Danny Embrey, Eddie Moore, Jeff Harshbarger, Adam Larson, Brad Cox and Mike Metheny have added his sound and spirit to their ensembles over the years. As a constant rhythmic morale booster, Brian thrives on the endless search for new ways to lift an ensemble.