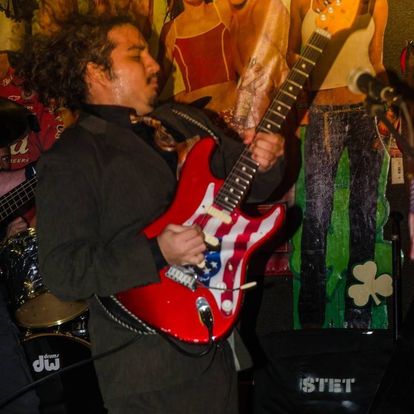 Former child prodigy Soul-Blues guitarist, singer-songwriter, producer, and multi-instrumentalist REGGIE KING SEARS is back in 2022 with a new album that expands on his signature down-home Blues, Rhythm & Blues and Southern Soul sound with more Funk and Neo-Soul grooves that will satisfy his fan-base while reaching a larger and younger crowd.

Sears, now 31, has spent most of his life as a professional musician and has received praise and earned respect from legends and contemporaries alike.

Rock and Roll Hall Of Fame inductee Blues legend Buddy Guy called him a “bad motherf*cker”; Rock and Roll Hall Of Fame Inductee Solomon Burke called him “the future” and dubbed him the new “King of Rock’n’Soul”; G. Love (G. Love and Special Sauce) has named Sears “one of the top guitarists in the world”; Roland Orzabal (lead singer of multi-million selling Tears For Fears) called Sears a “great talent”; and Christone “Kingfish” Ingram simply called Sears “the real deal”.

Shortly after playing his first gig on his 12th birthday, Sears met and befriended the legendary guitarist Hubert Sumlin who taught and mentored him. Further encouragement from B.B. King who told the young man to “Keep on picking young man and keep this music alive” confirmed that he was on the right track. He began touring full time by age 14, with the release of his debut album “Transitions”.

Studying and learning from Chittlin’ Circuit Blues legends, such as his mentors Solomon Burke, Bobby Rush and Marvin Sease, Sears became a bonafide entertainer, capable of dazzling audiences with his guitar skills, exciting them with his soulful vocals, engaging them with his natural stage presence and amazing them with his showmanship.

By age 20 he had released 4 albums, racking up three #1 Southern Soul radio hits with “Dip My Dipper”(2007), “You Betrayed Me”(2009) and Dirty Dancer (2010), won multiple music awards and played with a who’s who of legends and stars such as Buddy Guy, B.B. King, Solomon Burke, Pinetop Perkins, The Temptations and many more.

Sears’ enormous talents and ability to effortless blend multiple styles of Blues, Southern Soul, Funk, Neo-Soul and Hip Hop and weave them into a Rhythm and Blues fusion that ensures that he will continue to grow his fan-base and bring in a new, younger audience while pleasing traditional Blues fans.