18% Gratuity is automatically added to group seating of 8 people or more at one table, please contact us if you have a party larger than 4 people so we can arrange your seating accordingly.  Info@jewellomaha.com 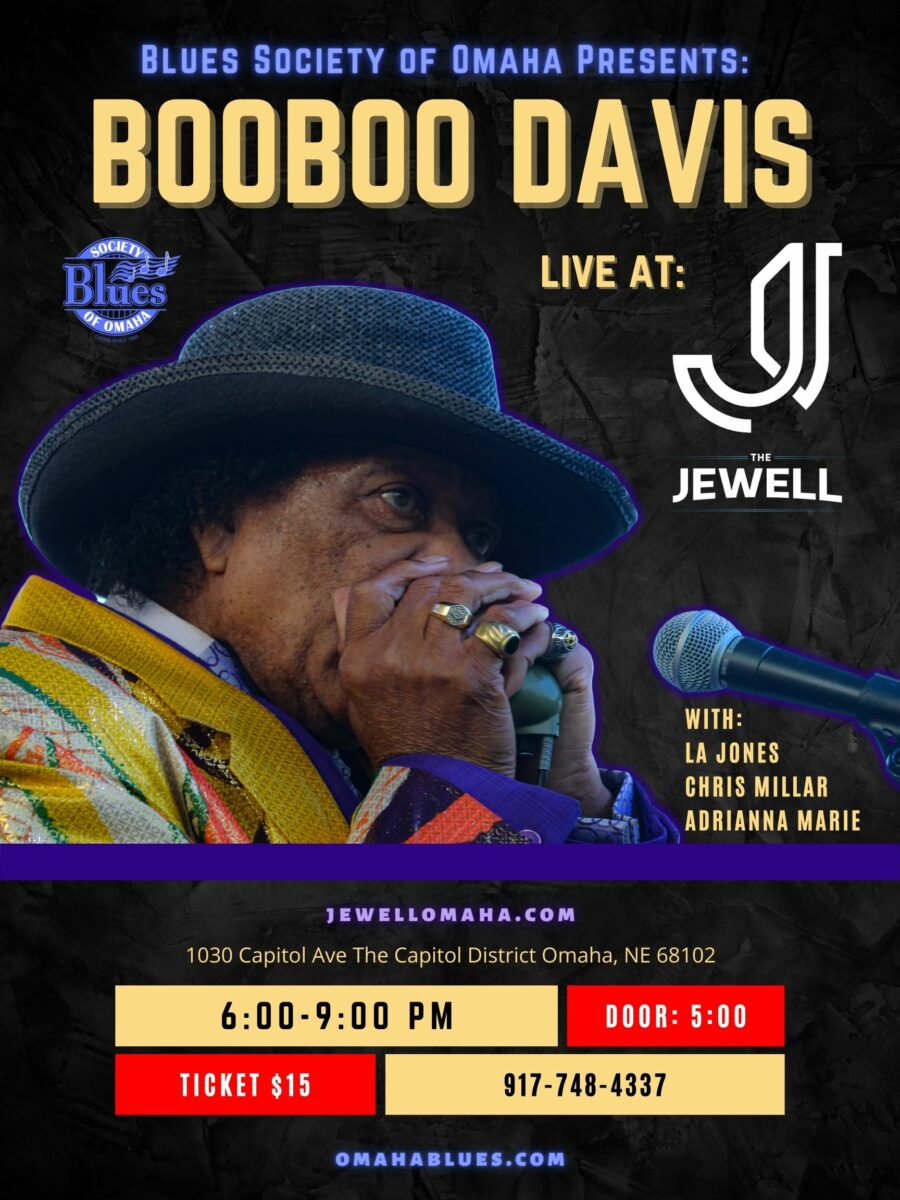 Boo Boo Davis is a survivor and belongs to the last generations of musicians that write and play the blues based on first hand experience of a hard life in the Mississippi Delta. He was born and raised in Drew, Mississippi in the heart of Delta. It was the richest cotton land in the South and the large amounts of field workers attracted the best musicians from the surrounding areas. The entire Delta region was rich with blues, but the town of Drew was a particularly fertile one. Charley Patton stayed near Drew for many years and several legendary performers spent time there. Sharecroppers sang loudly to help pass the grueling hours of work and without a doubt Boo Boo developed his loud, bellowing voice based on the singing he heard in the fields as a young boy. In fact, that voice, through the years has demolished many amps and speaker cabinets.

Boo Boo’s father, Sylvester Davis farmed cotton and played several instruments. Musicians who he played with include John Lee Hooker, Elmore James and Robert Pete Williams. Boo Boo remembers these and other musicians dropping by and rehearsing at their house. At the age of five Boo Boo was playing the harmonica and singing in church with his mother. By thirteen he was playing guitar, and by eighteen he was playing out with his father and older brothers under the name of The Lard Can Band. This band travelled all throughout the Delta. In the early sixties he went north to St Louis and was around during the heyday of the St Louis music scene (Albert King, Ike Turner, Chuck Berry and many others). Together with his brothers they were the weekend house band in Tubby’s Red Room in East St Louis for eighteen years.

Even though Boo Boo moved north to St. Louis, he will always be a southerner at heart. When he is at home (and not performing) his favorite pastimes are hunting with his dogs and fishing. During Boo Boo’s childhood there was no time or money for him to go to school so he never learned to read and write. However that did not prevent him to travel all over the world. Following his guiding spirit (that he calls Dave) Boo Boo has found a way to deal with modern society. The blues helps him to keep his spirit high and survive day-to-day life. It deals with all the basic raw elements of life; good and bad, plain and simple.