CANCELED and will be rescheduled TBA 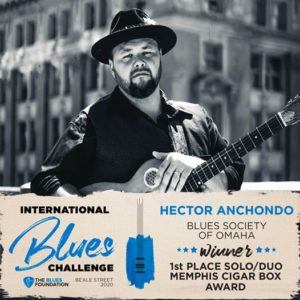 He was serious enough about following his calling to move to Chicago for a year, learning from the old-school blues traditions there. “When I started playing all blues, I wanted to make sure I had an authentic sound. So, not only did I move to Chicago to soak up the blues, I also refused to listen to any other style of music for an entire year other than blues. I started on blues then moved to more rock-based. Switching genres later in life, it was important to me to make sure I had a real sound.”

“I’m proud that I never gave up,” Anchondo reflects now. “There were times of self-doubt and even a couple times where I questioned if I should change my path. My love of music and performing kept me focused on the blues path.”

Anchondo is endorsed by Delaney Guitars and GHS Strings, and his guitar rack includes a custom guitar recently completely for him by Mike Delaney. “I’ve been lucky enough to be part of both families ever since I made it to the IBC finals in 2016.”

Put this in the “If you haven’t yet, you really should” category; join us at The Revue Lounge…Hector Anchondo has been rippin’ the place up.
-Rick Galusha of award nominated Pacific Street Blues Show on KWIR 89.7 The River

Blues Challenge:  The band receiving the most points at Round Two of the Blues Society of Omaha’s Nebraska Blues Challenge April 7 was Hector Anchondo Band. The final round is April 21 at McKenna’s. The April 21 winner will join Anchondo and Josh Hoyer & The Shadowboxers in the finals May 19, 5 p.m., at The 21st Saloon. –BJ Huchtemann of The Reader

His slide guitar is impeccable and voice, well for a 30-something, it’s mature for a blues singer –Kyle Eustice of The Reader

Here is Hector’s performance from the International Blues Challenge down in Memphis:

Posted by Blues Society of Omaha on Thursday, January 30, 2020