SHOW IS POSTPONED TO A LATER DATE, TBA.  CURRENT TICKET HOLDERS WILL  HAVE SEATS GUARANTEED FOR THE LATER DATE TO BE SCHEDULED, WE WILL ANNOUNCE THIS VERY SOON. 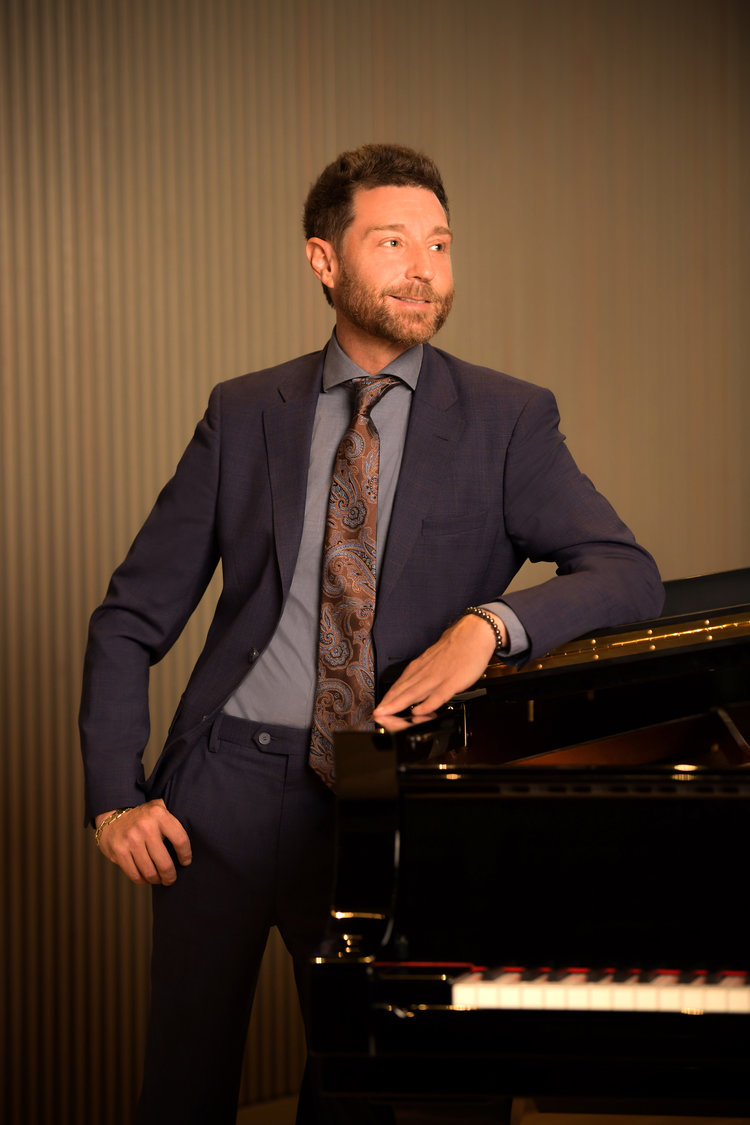 Throughout his career as one of the world’s premier living Jazz musicians, legendary bebopper Benny Green has established himself as a powerhouse pianist and bandleader, boasting concert appearances and recording credits with giants of the industry over the past 35 years. But prior to his forthcoming record Then And Now (his 20th album as leader), Green has never featured either vocals or flute on any of his albums. Painting with rich aural colors and textures, Green boldly steps into new musical space for Then And Now, featuring both vocal sensation Veronica Swift and flautist Anne Drummond.

Jazz sensibility comes naturally to Green, the NYC-born son of a jazz saxophonist and a Berkeley, California native. At a young age Green’s ear became fine-tuned to the art form, and he soon found himself invited to perform alongside Jazz icons like Betty Carter, Freddie Hubbard and Ray Brown. Art Blakey found Green’s swinging musicality to be the right ingredient and invited Green to join the ranks of his elite Jazz Messengers – this relationship would prove deeply influential to Green, who has since dedicated his career to straight-ahead hard bop.

Although featured in a wide variety of performance arenas, Green is in his element and shines as the leader of the Benny Green Trio. With drumming master Kenny Washington and revered bassist David Wong completing the piano trio, Green commands the stage, delighting international audiences in his 38th year as a bandleader. It was only natural that this trio would become the springboard for Green’s recent new musical adventures.

A recording session led by prodigy vocalist Veronica Swift made such an impact on Green that he expanded his own generally instrumental traditions and began collaborating with both Swift and his trio. Green’s authoritative skill at the keyboard and hard-swinging ensemble were the perfect sonic landscape for Swift’s masterful musicianship and organic approach to scat singing, with Swift proving her voice was the perfect soloing instrument to complement Green’s stylistic swing.

Swift, like Green, grew up in a musical family – her father a world-renowned bebop jazz pianist Hod O’Brien, along with her mother, vocalist Stephanie Nakasian, had made Swift’s young life rich with Jazz tradition. Swift and Green were a well-matched pair, each dedicated to bebop and swinging Jazz styles. When Swift began performing together with the Benny Green Trio, they discovered a dynamic element of interactive group synergy and interplay. They regularly perform together still, celebrating the musical vision they share.

With Then And Now, Green explores yet more new ideas and soundscapes, delving into the rich sounds of a Rhodes electric piano on a few tracks. The vintage Rhodes, with Green at the helm, becomes a new and darker sonic foundation for Swift’s voice. Flautist extraordinaire Anne Drummond joins Green on the new record as well, after having previously performed some of Green’s own original music on her recording Revolving.

Green’s compositions for Then And Now exemplify the album’s title: this record is musically distinct from any of his previous records. Longtime fans of Green’s will immediately recognize his unparalleled mastery and swing, but will also hear him stretching out comfortably in these new colors. The juxtaposition of Green’s familiar trio format and the new voices and textures on Then And Now create a heartfelt program, anchored in the swinging tradition that’s always been so central to Green’s heart. The new album is definitively, authentically Benny Green – but it conveys a side of Benny Green you haven’t heard before.

Then And Now begins with Green’s salute to revered soul singer, pianist, composer Donny Hathaway which quotes both the singer’s “Valdez in The Country” and his duet with Roberta Flack, “The Closer I Get to You; Green’s “Donny Hath A Way” is a hard-grooving tune featuring flute, percussion and Green on Rhodes.

Swift joins Green on Dexter Gordon’s “For Regulars Only,” a childhood favorite of hers, and performs her own stunning vocal transcription of Freddie Hubbard and Dexter Gordon’s original trumpet and tenor saxophone parts. For Cedar Walton’s “Latin America,” Green explores the duality of the keyboard itself, playfully balancing the Rhodes and acoustic piano as two characters: the Latin character and the gringo character, respectively.

Swift’s touching lyrics about life lessons, set to Green’s “Naturally,” feature Swift exploring her own sonic comfort zone, with her voice eventually layered over itself in delicious triple
texture. Driven by Washington and Wong, Green and the trio lay down a hard-hitting arrangement of Hank Jones’s “Minor Contention”, followed by a meditative dedication to California wildlife, Green’s calming “Enchanted Forest” as chamber trio of flute, piano and bass.

Washington plays a classic Art Blakey-style 4-bar introduction out front on Horace Silver’s “Split Kick,” for which Swift rejoins the trio, covering the original trumpet and alto saxophone parts as played by Clifford Brown and Lou Donaldson with her voice. Green pays tribute to Duke Pearson, one of his favorite composers, with “Say You’re Mine”, and along with Swift recalls his mentor Walter Davis, Jr. with “Humphrey”, first recorded by Green in 1991 on his album Testifyin’. Swift’s vocals follow the trio’s opening chorus on “Something I Dreamed Last Night,” harkening Anita O’Day’s classic ballad style.

But the crowning moments of the album are the “then” and the “now.” With “Hipsippy Blues” Green calls to mind his greatest musical influence, Art Blakey, and the time they’d spent playing together: a mindful musical glace back to “then.” Then Green turns to the “now”, celebrating the 25th anniversary of the release his own composition “Wiggin” (first recorded in 1993 on Green’s That’s Right. Green stands firmly in the present, surrounded by fascinating musical colors, textures, collaborators, and ideas.

With the release of Then and Now, listeners get a rare glimpse of Benny Green, a giant of Jazz in his own right, both then and now.

My Father introduced me to this music. his name is Bert Green, he was born in pittsburgh, pennsylvania, in 1928. he played the tenor saxophone with all his heart, and while he consistently showed me throughout my precious time with him a selfless admiration for any cat who could really play the horn, his musical hero and prime inspiration was unquestionably Lester Willis Young, ‘Prez’. recordings like the 1936 Count Basie small group session with ‘shoe shine boy’ and ‘lady be good’, his solos with the Basie orchestra in the late 1930’s into the early ’40’s, and most of all the dreamworld realm of Prez’s recordings with Billie Holiday, formed the core foundation for my Father as a tenor player. you could hear and feel it whenever he put that 1938 lacquer-barren selmer balanced-action tenor in his mouth. my Dad. pretty much my Father’s last words to me years later as he was dying in his bed at home, were ‘you’re a beautiful cat’. that’s what my Dad was; a beautiful cat.

he seemed to understand musical expression profoundly as a listener, be it Bartok or Slim and Slam, and as a player he swung and played the blues. he made no secret that he expected authenticity from me as a Jazz musician, as his ‘son-of-the-righthand-man’, which he explained to me is what my name, Benjamin, means.

he always wanted the very best for me. ‘in our household, music comes before medicine’, i clearly remember him telling me when i was around ten years old. he made sure i understood the importance of being able to read music. years later, in 1984 when i was 21 and on my first commercial recording session, i was thanking my Dad silently in my heart for what he’d shown me. i still thank him inside wherever i go to play or teach, he is right inside of me, more than ever before.

when i kept repeatedly coming back to the garage behind our house at the age of 8 or 9, to sit quietly with my dad as he sculpted and listened with an ear-to-ear grin to his Thelonious Monk, Charlie Parker and Ray Charles l.p.’s on his portable phonograph, he and i both realized that i was fast getting the ‘bug’. once you have it, nothing can quite get inside you like the feeling of real Jazz, meaning that the improvisation truly swings and has some authentic blues feeling to it, as well as taking chances and spontaneously executing them with virtuosity. there is infinitely more to Jazz than i will ever begin to ‘know’, but i will and DO put my life on the line that with the removal of these essential vertebrae, calling something ‘jazz’ does NOT make it so.

one day, my dear Dad, with such a careful and caring tone which he maintained to me as a musician to the day he died, and honestly i still hear his voice inside me in each day of my life, told me ‘if you’re really interested in this music we’ve been listening to, you should understand that it’s a black people’s music. other people can play it and enjoy it; i do as you can see, but you need to know where it’s coming from’.

Betty Carter is in all truthfulness, whether i remember it in each day or not, effectively my musical mother. Art Blakey, Ray Brown, Oscar Peterson, Milt Jackson and Freddie Hubbard all blessed my life by inviting me to participate in their music, included me on their recordings and live shows, and Art, Ray and Freddie even recorded my original tunes on their records. i have something to share today because i got to play with the hardest swinging bassist and drummer in the history of Jazz; i got to feel this!

i have always wanted to belong and be included and be a part of The Music, black-american music, Jazz. anyone who has ever gotten to know me or been in my home, knows exactly what i’m about. i love classic Blue Note quintet records, and the sound and feeling of a trumpet-saxophone front line like Lee Morgan and Hank Mobley or Kenny Dorham and Jackie McLean, is what i love, and it inspires the music i write. i am a Jazz Messenger, my life is dedicated to Jazz.