Beverages will be served from 5pm -8:00pm *please note NO food service kitchen is closed 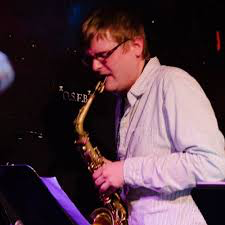 Dr. Andrew Janak is an active saxophonist/composer/arranger/educator currently based out of Lincoln, NE after previously spending several years in Chicago, IL.

Also a prolific composer, some of Andrew’s compositions have been performed/recorded by groups around the United States including the UNL Jazz Orchestra with Victor Lewis, DePaul Jazz Ensemble with Randy Brecker, Bob Lark’s Alumni Big Band and the Nebraska Jazz Orchestra. He recently premiered his suite for tenor saxophone and mixed chamber jazz ensemble, “Midwestern Portrait,” in spring of 2018, in which Andrew was the featured soloist. He was also a finalist for the ASCAP Young Jazz Composer Awards and received a Downbeat Outstanding Performance award for outstanding graduate college arrangement.

Dr. Janak is also an active scholar with research interests in jazz composition, jazz saxophone and jazz improvisation pedagogy. He has presented at the International Society of Jazz Arrangers and Composers (ISJAC) Symposium and the Midwest Music Research Collective (MMRC) Conference and the Jazz Education Network (JEN) Conference. Andrew graduated with a bachelors degree in music education from the University of Nebraska-Lincoln, a masters of music in jazz composition from DePaul University, and a DMA in jazz studies/composition from the University of Nebraska-Lincoln. His debut album Borrowed Time was released in June 2017. Currently Andrew is the Adjunct Instructor of Saxophone at Doane University in Crete, NE and Assistant Director of Bands at Mission Middle School in Bellevue, NE.