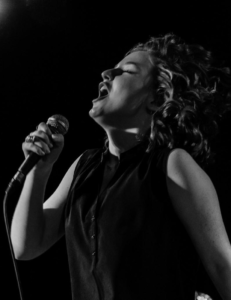 Grace is an 18 year old singer/songwriter from Omaha, Nebraska. Her sound is a culmination of blues, jazz, indie folk and pop. Her shows are focused on honesty and vulnerability where she captivates and silences a room with her voice. Grace intertwines her young heart with an old soul. The intimacy and connectivity she shares with her audience stem beyond a quick song and dance and into a transformative release of emotion and expression.

Grace has performed at many venues, both large and small around the region and has opened for many international and national acts.  She was an American Idol 2019 contestant and recipient of a Gold Ticket to Hollywood.   Grace received two DownBeat Student Music Awards in 2019 for Vocal Jazz Soloist and for Blues/Pop/Rock Soloist.  The DownBeat Student Music Awards are considered to be the most prestigious awards in jazz education.  Grace represented Nebraska twice at the International Blues Challenge Youth Showcase and also had a feature performance at the 2018 Jazz Education Network (JEN) International Conference.