*Please arrive early when doors upon if you are planning to eat, so kitchen can allow enough time for your food orders.

*NOTE: All food orders must be placed before or by 9:15pm, due to kitchen that closes at 9:30pm

“With Love, From Kansas City” 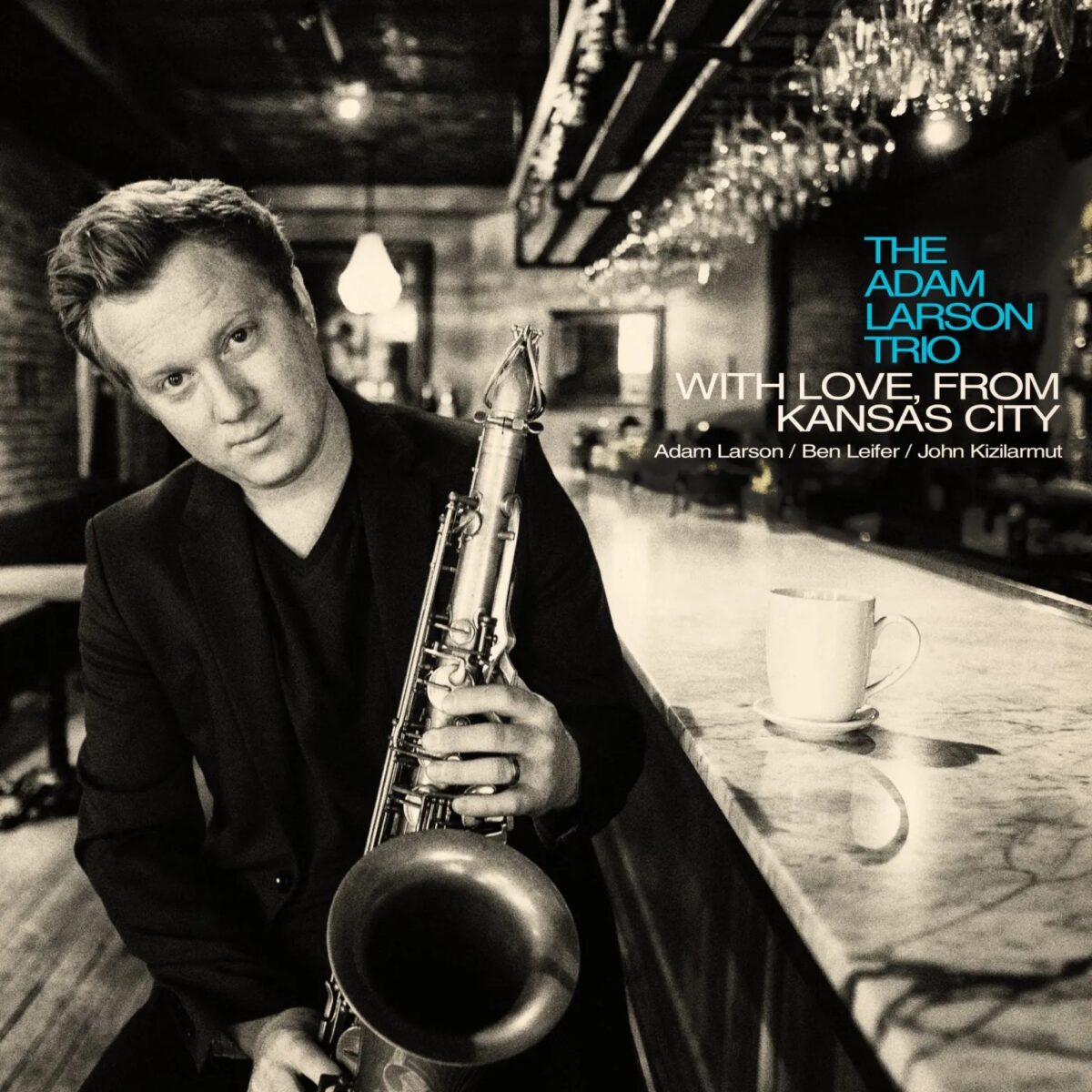 Celebrated Saxophonist and Author Adam Larson Announces the Eagerly-Anticipated Second Album Within His Trilogy of Breathtaking Trio Releases, With Love From Kansas City is Out on September 2, 2022, on Outside in Music

Outside in Music is excited to announce the September 2, 2022 release of With Love, From Kansas City, Adam Larson’s spirited follow-up to With Love, From Chicago – the saxophonist’s critically-acclaimed February 2022 release. Like its predecessor, With Love, From Kansas City finds the saxophonist alongside a chordless trio, surrendering the support of harmonic accompaniment for the freedom and melodic interplay associated with the trio configuration. On his seventh album, Kansas City takes center stage, as Larson explores his relationship with his current home, with the musical support of his fellow Kansas City cohorts, bassist Ben Leifer and drummer John Kizilarmut.

This is the second in a planned trilogy of trio recordings due out within 18 months, with each release highlighting a different city that has had a significant impact on Larson as a musician and artist. In 2019, Larson relocated to Kansas City after an 11-year tour of duty in New York City. Since his arrival, the bandleader has established himself as a leading creative force locally while maintaining a dizzying national performing, teaching and recording schedule. The first album of the trilogy, With Love, From Chicago was released in February 2022 and featured bassist Clark Sommers and drummer Dana Hall alongside the prodigious Larson. Anthony Dean-Harris of Downbeat Magazine called With Love, From Chicago “…an extremely satisfying saxophone-bass-drums trio…one of those albums that should stay in one’s rotation” and gave it a rare 4.5 star-rating. “With Love, From Kansas City” reveals yet another side of Larson’s stunning artistry.

In the album’s liner notes, Michael Shults remarks: “three of the city’s most important musicians and four of its most prolific composers are documented here at their zenith. The traits that define Kansas City – friendliness, hope, optimism, and most importantly love – are on ample display on With Love, From Kansas City.” The prolific composers Shults refers to include Larson as well as three Kansas City-hailing jazz greats whose compositions are featured on this release – Charlie Parker, Bobby Watson, and Peter Schlamb. Featuring original compositions by Larson as well as classics from some of the Kansas City-Born architects of the jazz idiom, this adventurous trio strikes a perfect balance between honoring tradition and innovation.

With Love, From Kansas City begins with three stellar examples of Larson’s writing. The bright-tempoed “New Thread” features Larson on alto saxophone instead of his customary tenor. The piece demonstrates Larson’s jaw-dropping improvisational prowess and the tight-knit interplay of Leifer and Kizilarmut. “Life Cycle” was inspired by Larson’s recent 30th birthday. The bright and tuneful melody statement gives way to an athletic solo statement by Larson that showcases his hallmark flexibility in the altissimo. “Simple Beauty” is truly an ensemble piece that features Larson on the soprano saxophone, with Leifer and Kizilarmut engagingly playing across time over the ballad’s unusual form. This piece showcases a more subtle, nuanced side to Kizilarmut’s playing, in contrast to some more muscular moments on Larson’s other original compositions. “The Jewel”, another Larson original, is a melodic triple meter tune that showcases a tremendous solo from Leifer.

Larson does his part to pay homage to the great Kansas City jazz legends who came before him with evocative takes of several classics. The celebrated saxophonist demonstrates his deep study of Charlie Parker’s musical vernacular on Parker’s “Chi-Chi”. The trio offers an energetic rendition of Kansas City-based vibraphonist and pianist Peter Schlamb’s “REL”. And finally, as Shults remarks in the album’s liner notes, “Perhaps no Kansas City-raised musician has had a greater influence on the recent renaissance of the city’s jazz scene than saxophonist and composer Bobby Watson. Through his long-held teaching post at the University of Missouri-Kansas City, Watson was responsible for attracting and retaining much of the city’s young talent, including Ben Leifer, a former pupil of Watson’s. Bobby’s “Beatitudes” brings the album to a close with Larson once again on the alto, delivering the melody and solo statements with the same kind of fire often associated with Professor Watson. The depth of Adam’s improvisational prowess is displayed here, making use of the horn’s extended range and exploring the full arsenal of timbral colors available to him. Kizilarmut drops bombs in the outchorus before a compelling taper.”

Described by critic Howard Reich of The Chicago Tribune as “a player for whom the word ‘prodigious’ was coined”, and by Nate Chinen of The New York Times as “the sort of jazz musician who gets flagged early on as a promising talent and then hustles to meet every requirement for success”, Larson has garnered numerous awards that distinguish him as one of the most promising artists of his generation. A preeminent force on the jazz scene, Larson has released six critically acclaimed albums, and performs regularly at venues around the world.  Beyond maintaining an active touring and recording schedule, Larson continues to be a sought-after clinician and master class presenter at notable high schools and colleges throughout the country and is the author of 13 successful jazz etude books that are currently being sold in over 45 countries

“The tenor saxophonist Adam Larson is the sort of jazz musician who gets flagged early on as a promising talent and then hustles to meet every requirement for success. At 25, he’s still forming his identity as an artist, but his third album, “Selective Amnesia” (Inner Circle), suggests that he’s closing in on something perceptive and streamlined. He has a fine rhythm section, with Fabian Almazan on piano, Matthew Stevens on guitar, Matt Penman on bass and Jimmy Macbride on drums. And his compositions are thoughtful, with ample breathing room for any soloists. (They reciprocate with excellent work, especially Mr. Stevens on an anthemic ballad called “Gratitude.”) Mr. Larson’s own improvisations tend to be articulate and brisk, darting up and down his range. This album is a good marker for him, a sign of how far he has come and a new standard for him to beat.”- Nate Chinen, New York Times

“He possesses a rhythmic sophistication and compositional cleverness that should help him distinguish himself from the pack of young tenorists on the current scene….With undeniable command over his instrument, Larson can do just about anything. His upper-register playing is superb.”- All About Jazz