Instrument Profile: The Hammond Organ and the Leslie Speaker

One of the regular features you’ll see on the Jewell stage is arguably one of the more potent tools used in the creation of modern music- the Hammond Organ. Originally devised as an instrument for home entertainment at the time that record players and hi-fi stereo sets were also becoming popular, the Hammond Organ is a miracle of engineering and design devised in the mid-1930s. Inspired by the costly pipe organs you’d typically find in churches and cathedrals, the home organ attempted to reduce this in size to something that could comfortably fit in the living room, or provide a lower-cost and more portable alternative for smaller parishes. 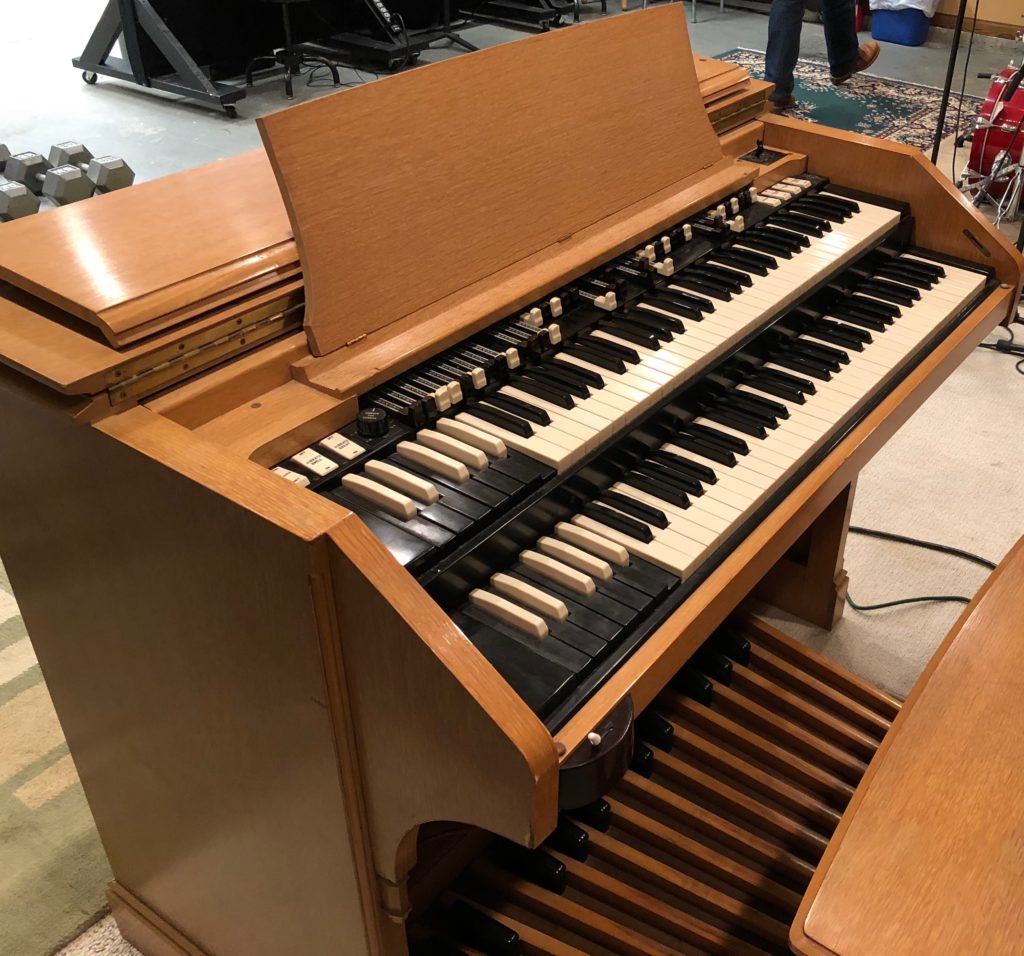 The most popular and widely known of the Hammond organs, the B-3 creates sound by rapidly rotating electro-mechanical tonewheels next to an electromagnetic pickup, somewhat similar to the pickups used in electric guitars. The number of tonewheels being actively engaged and the strength of the current generated impact the tone and volume the machine puts out. Designed prior to the broad use of solid-state electronics, the tubes, transistors and tonewheels are all hand-wired, employing more than 2,500 hand-wired contacts throughout the device. Controlled by drawbars similar to the stops on a pipe organ, the tonewheels provide a similarly broad range of possible harmonic tones and overtones, which are further modified by the use of chorus and vibrato, two sound manipulating effects built into the system.

On its own, the Hammond organ sounds quite similar to a traditional church organ but lacks some of the depth and variety of tone created by the pipes themselves and the speed and frequency with which air is blown through them. These organs were originally marketed with large speaker cabinets to amplify the sound. In an effort to better reproduce the rich variety of tone of true pipe organs, inventor Donald Leslie began experimenting with different techniques to further manipulate the outputted sound. Arriving at a design that involved projecting a speaker into a rotating horn, and later splitting the sound between a rotating upper horn and lower baffle, Leslie discovered that adjusting the speed of the rotation allowed for variation of sound from what could best be described as a low warble to a fast chirp.

An interesting story of mutual evolution of the organ and the associate speaker cabinets involved much innovative design, patents, evolution, market slumps and resurgences on the part of both Hammond and Leslie. Ultimately technology would allow for the creation of cheaper and more compact organs, leading to digital synthesis and moving beyond the “need” for hand-wired 400 lb. monstrosities to be lugged around to perform. Despite that, the original organ designs- most noteworthy the B-3, C-3 and A-100 are much sought after for their unique sound, playability and stage presence. Digital recreations certainly come close, and there continues to be much research and product development in this area, but many purists still stick closely to the original instruments.

The model you see most often on the Jewell stage is Mitch Towne’s A-100, known as such because of the solid cabinet surrounding the bass pedals, which contains two speakers facing the player. It includes two decks of keys, or manuals, and an octave on each manual of offset black-on-white keys that control tonal presets. The B-3, with its wooden legs, and the C-3 with a similar enclosed cabinet but no built-in speakers, are more or less identical mechanically speaking and use the same method for creating sound. Many home organs such as those by Gulbransen, Conn, Wurlitzer and other brands, included Leslie speaker technology built-in, as well as rhythm devices and more. The vaunted Hammond models contain no such rhythm effects but feature bass pedals that can be played with the feet and duplicated with the lowest octave of keys on the lower manual. Settings on the organ labeled “Percussion” actually control a high pitched chirp or dot noise that sounds when a player strikes a key on the upper manual. This percussion sound provides emphasis to melody lines, created by bleeding sound out of the upper most drawbar’s register and filled out by the rich tone of the note behind it. The great organist Jimmy Smith produced a well-known album “Live at the Paradise Club” in which the percussion of the organ was broken in a more-or-less “always-on” setting. So distinct was the sound that many artists have sought to recreate, and a number of digital organ “clones” include a close replication of the setting as a preset.

A great many genres and artists have benefited from the presence of the organ on stage and in the studio, from the aforementioned Jimmy Smith, blues master Jimmy McGriff and jazz legend Joey DeFrancesco, to rock bands such as the Allman Brothers and Steve Winwood, filling out the sounds of Motown and Soul artists such as Booker T. Jones and countless others. Perhaps most interesting about the organ is its ability to perform multiple roles simultaneously, allowing a skilled player to provide bass, rhythm and lead by employing both hands and feet. This gave rise to the “organ trio” format, most often an organist, guitarist and drums, but sometimes substituting the guitar with a saxophone, trumpet or other tonal instruments.

Take care not to miss the organ in action at a number of the upcoming Jewell gigs, including this Saturday’s performance of the Troy Roberts Trio, which features Mitch Towne and the excellent KC drummer Marty Morrison.